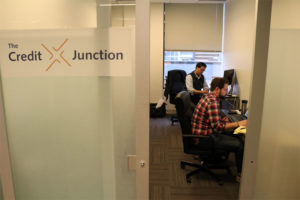 A startup that’s focused on connecting “small and medium industrial supply-chain businesses with private investors” is not going to win a sexy pitch competition, but it’s already growing fast in its new Rosslyn office.

The Credit Junction is based in Rosslyn’s ÜberOffices and has raised $2 million in seed funding to fund its online marketplace. Founded by CEO Michael Finkelstein with Chief Strategy Officer Sergio Rodrigueira, the company is “60 to 90 days” from launching its platform.

The concept is relatively simple: The Credit Junction is an online marketplace. Small manufacturing and industrial companies — the types that supply equipment and materials to large multinationals — who need capital investments sign up. TCJ’s technology platform, as well as its six-person staff, vets the company, assesses its value and potential and can get approval for a loan from its network of lenders also on the platform.

“We thought there was a way to use technology and data to create a better credit model,” Finkelstein, who is based in New York, told ARLnow.com. “The use of data creates a better understanding of a company. We use tech as an enabler, but there are lots of human elements too. This allows you to look at different sources for a company’s opportunities.”

Finkelstein and Rodrigueira met a year ago at a conference in Chicago. Finkelstein isa 15-year veteran of startups, beginning in Silicon Valley just a couple of years before the dot-com bubble burst. Rodrigueira spent four years in Navy active duty before joining the re-election campaign of President George W. Bush in 2004. He worked for Bush before deploying to Afghanistan as a Naval reservist. When he returned, he worked for Rep. Eric Cantor and in cybersecurity and finance policy in the House of Representatives.

Rodrigueira also worked on the Dodd-Frank financial reform act, and after leaving the public sector, he thought “there’s got to be a better way to do this” when it came to banks and financing. When he met Finkelstein almost exactly a year ago, and heard his idea, Rodrigueira said “I want to come work for you.”

Although the concept isn’t complicated, the problem The Credit Junction purports to solve is. The companies Finkelstein and Rodrigueira are targeting have relied on local banks for financing “since the beginning of time,” Finkelstein said.

“In 2008, the world changed,” Finkelstein said, referring to the global recession. “Lenders are cutting back and there are fewer options for these companies.”

Not only does Finkelstein say TCJ can give a response to a loan application in two weeks — whereas traditional banks or government agencies can take two months or longer — but he also says the system provides more transparency during the waiting period. 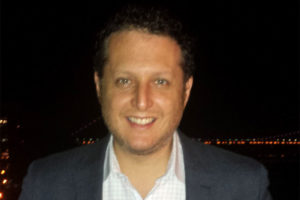 “We’re able to create transparency and efficiency in the process,” Finkelstein said. “A borrower knows where he or she fits. They know whether they qualify extremely quickly. That’s a big deal.”

GLI Finance led The Credit Junction’s seed funding round, and, for the company’s launch, is also the primary capital investor in the marketplace. Over the next few months, the company will target borrowers in industries, and grow both sides of the marketplace slowly.

Part of The Credit Junction’s challenge is to find companies that want to borrow. Considering the industry’s inherent need for capital, Finkelstein and Rodrigueira are confident the demand is there.

“Holistically, our biggest challenge is education,” Finkelstein said. “But there are plenty of opportunities to help their business.”

“What’s exciting about the space is how broad and diverse the options are,” Rodrigueira said. “There are companies not just building ships or plans, but now they’re building things like drones … To get the word out to businesses, that’s the exciting part. Once companies hear what we can provide, their eyes light up.”

END_OF_DOCUMENT_TOKEN_TO_BE_REPLACED

More Stories
Police: Man Arrested for Trying to Rape Teen in BuckinghamPolice Ramp Up Ticketing on Food Trucks in Rosslyn