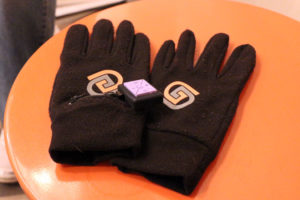 A new invention — by a company with a cofounder living and working in Arlington — allows people to control music and other apps on their smart phone by simply tapping their fingers together.

GoGlove is the product, and it works with a bluetooth remote controlled by sensors in the fingertips of a glove. The sensors are attached via an electrical harness to the remote, which can be used separately from the glove.

The user links the remote to the phone, and can play and pause his or her music, adjust the volume, and even take photos without ever having to take their phone out of their pocket.

The GoGlove is the brainchild of Ben Harris and Eric Ely, two Boston-based entrepreneurs, in the works for two years. Michael Conti, a friend of Ely since the two attended George Mason University together more than a decade together, was brought on about six months ago for his area of expertise: mechanical engineering.

“Ben was on the mountain skiing and wanted to adjust his music, but he had to take off his gloves and unzip his jacket to get to his phone,” Conti said. “By the time he had finished, his buddies were halfway down the mountain. That’s when he thought ‘there had to be a better way.'” 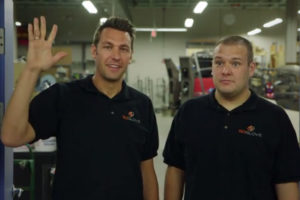 Conti heard about the idea after Ely and Harris started sending emails to friends and family asking for input. Conti told ARLnow.com near his home in Ballston last week that he sent back a long reply with several ideas for ways to improve the product.

“I told them it has a lot more applications than just skiing,” Conti said. “They asked me about cases and harnesses. They really needed my expertise. I got really interested and they brought me in as a cofounder.”

Conti helped design the magnet in the thumb of the glove, which, when tapped on the sensors on each finger, sends a message to the smart phone to perform different functions. GoGlove has patents pending on the magnet-sensor technology, but it took “multiple iterations” to get the gloves and remote to work the way they envisioned, Conti said.

The original remote prototypes have been built using Ely’s 3-D printer. With the design nearly perfected — Conti said they’re always looking for ways to improve the product — the GoGlove team launched a Kickstarter page last month, and it reached its $40,000 over the holiday weekend. The page is still open for contributions until Dec. 4, and those who pledge $79 or more will receive a pair of GoGloves, at a discount of the $129 the gloves are expected to retail for.

“We’re figuring out ways to bring the price down,” Conti said, although the company is marketing it as a luxury item for dedicated skiers and outdoor types. “You can also buy the remote module for $49, if you don’t want the gloves.” 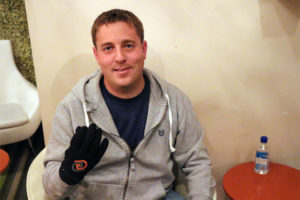 Conti is an aerospace engineer, Ely is an electrical engineer and Harris works in marketing — they did not want to disclose their full-time employers — but the three teamed up for many late nights on Google Hangouts to work out the kinks of the project before going to market.

In addition to controlling music and taking photos, the gloves will have the ability to read texts aloud to Android users. Once the company is fully launched, Conti said they will work on ways to build the technology into leather gloves for more formal settings, and to add functionality.

Those who purchase the gloves through the Kickstarter can expect to receive them in April. If buying the gloves as a Christmas gift, Conti said they can provide a letter telling the recipients that “this is the cool technology you’re going to be receiving in the future.”