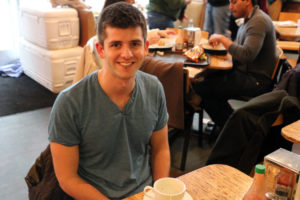 For as long as he can remember, Spencer Johnson and his friends haven’t played the same games as a lot of folks their age.

Instead of football, Johnson and five of his friends played “end zone,” a game in which there’s one quarterback, one pass rusher, two receivers and two pass defenders. There are points for touchdowns, sacks, completed passes and everything. The game is fun, easy and totally made up, Johnson says.

“We played made up games more than actual sports,” Johnson told ARLnow.com. “I had a Microsoft Excel spreadsheet of all the games we’ve invented.”

Those games are the foundation for the Culdesac app, which Johnson founded and is just weeks away from launching for the iPhone. The app allows users to search for games — both indoor and outdoor — that other users have invented. It also allows them to create their own games, with simple inputs for number of players, teams, scoring and positions. 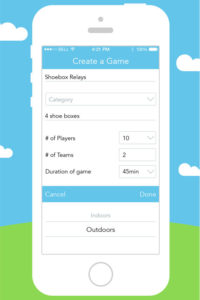 The app links directly to Facebook, so the feed — once the user base grows — will filter itself to games being played and submitted by one’s peers. For preteens, that means other preteens and fun outdoor games. For college students, it could be drinking games.

“There are so many games out there that are spread only through word-of-mouth,” Johnson said. “There’s really no place you can go to reliably find original games like this.”

Johnson is 24 and works for a family friend at Trusted.com. Johnson said that friend has served as a mentor, and encouraged him to try to start something on his own. The Courthouse resident had already had a pitch deck for an app with the games he and his childhood friends played together.

“I had put money aside to do something weird with it,” Johnson said. Six months ago, that began to take shape, as he did market research to validate his idea and hired developers from MessApps to help refine his prototype into a user-friendly, social app, with tabs, a feed and photo and video sharing tools. 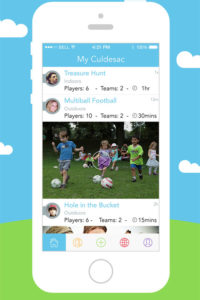 The app is soon undergoing iTunes App Store review, after which it will become available to download. That’s when Johnson plans to make his big marketing push to grow the users on the site. It will start with friends and family, and he plans on targeting parents.

“Twelve million kids are quitting rec sports because they’re not fun,” Johnson said. While he views everyone as a target audience, he feels the strongest chance he has to find a foothold is in the youth demographic.

Johnson isn’t shy about admitting what he doesn’t know. Although he knows how he and his network would use Culdesac — he’s hounded his game-inventor friends considerably in the last six months for feedback — he doesn’t pretend to know how the larger population will use his product.

“We’re going to have to change as it grows,” he said. “Right now we’re just going to see how people use it and build up content. It’s going to take work. I’ve just got to figure out where and why they’re using it.”

Johnson said he and his friends will play the games others submit, shoot video of themselves and upload it, to help increase exposure for each game. YouTube will be a “big platform” for the app’s marketing.

Johnson is funding the app and company himself, and isn’t seeking investment. The Virginia Tech alumnus hasn’t always wanted to be an entrepreneur — he was a biology major in college — and isn’t of the idea that his technology will change the world, but there is a deeper mission near the core of his business.

“There’s a need to use technology to get people away from technology,” he said. “But, for now, we’re just trying to give people ideas to do something fun together.”