Let me introduce myself — I’m Garrett. I’m a beer lover, be it craft or import, and a Certified Beer Server in the Cicerone Certification Program. I’ll be writing the beer articles in ARLnow for the folks at Dominion Wine and Beer. I’m on Instagram as CraftHockey, check out my posts for a preview of what I’m going to write about, and more. I can’t wait to share some great beer with you all!

The beers I want to share with you today have two things in common: they are imperial stouts and they were aged in barrels. Either attribute makes them special, but together they transcend your average barrel-aged ale or imperial stout. Let’s step back for a second and learn about what these two things mean.

I used to wonder what it meant for a stout — or any style of beer — to be called “imperial.” Well, in 18th century Russia, the ruling class loved stouts. They were imported from England, but the long trip took a toll on regular stouts. Imperial stouts were developed for export using more hops and malt giving them much higher ABVs so they could stand up to the long journey.

One of the first breweries making this rich beer was Thrale’s Anchor Brewery in London. They were bought in 1781 by Barclay, Perkins & Co. who went on to establish the classic recipe for the imperial stout. Now, we call nearly any beer that has a very high ABV an “imperial.”

Barrel aging, like the “imperial” designation, is something that is saved for only the most special of beers. When the alchemy that is barrel aging works, the result is magical. Wood contains a chemical called lignin, among others, which is absorbed by the beer and converts to vanillin over time — it tastes like it sounds.

Of course, beer was stored and sold from wooden barrels for many years even into the 20th century, but great lengths were taken to ensure that the wood didn’t impart any of its own flavors. According to Randy Mosher, in 1992 Chicago’s Goose Island was one of the first American craft breweries to commercially age beer in bourbon barrels to take advantage of the flavors they can impart. 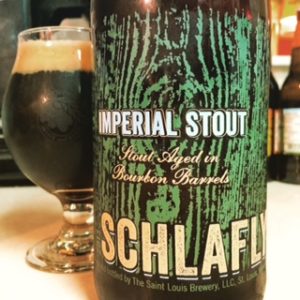 Before you even drink this opaque black stout, it’s clear that this has been in aged in wooden barrels. The aroma has the caramelized sugar and woodiness to be expected with a beer in this category. The big pay-off is in the taste, though — its a mixture of molasses from the sip to the aftertaste with a sharp edge from the alcohol. As it warms in the glass, Schlafly Imperial Stout’s molasses grows more complex with the addition of stewed fruit. This stout is a warming treat to sip and savor. 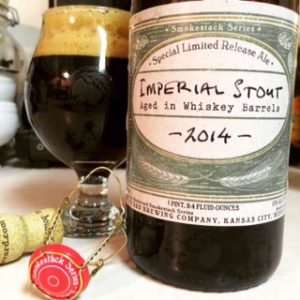 This powerful imperial stout fools the nose at first, as it has the aroma of a dry stout. There’s little hint of the barrel-aged goodness in the glass. Once you taste it, though, the wood comes through along with sweet caramel and the tell-tale alcohol bite. I particularly enjoyed this when it warmed up in the glass. Interestingly, this stout poured and feels thinner than most stouts of it’s type, but that is not a negative. Boulevard’s Imperial Stout is a rich gem that is perfect as the days get colder again. 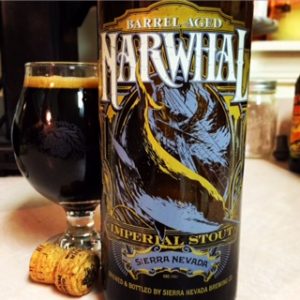 This very special version of an already limited release pours as smooth as syrup with little head forming. The aroma is of buttery caramel, which only intensifies the overall flavor of a slightly boozy caramel sauce. What bitterness remains of the hops comes in during the aftertaste to keep this sweet beer from being cloying. Barrel-aged Narwhal takes what is normally a lively, already strong imperial stout and mellows the edges. If you let it warm in the glass, you’ll be treated to the tell-tale vanilla flavor that comes from aging in wood. This is a unique treat that will please as a dessert drink. 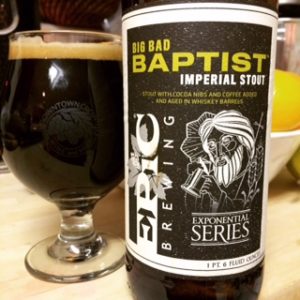 Utah’s Epic Brewing reserves its most compelling beers for its Exponential Series. That’s where you’ll find Big Bad Baptist. Brewed with cocoa nibs and coffee beans then aged in whiskey barrels, this stout is like dessert in a bottle. Vanilla and caramel, two key wood-derived flavors, are all over the aroma. The flavor is where the real pay-off is, though, with its complex and satisfying combination of coffee, spice and chocolate with just enough of an alcohol bite. This big beer delivers everything Epic aims for and more.