At the end of “The Matrix,” Keanu Reaves’ Neo suddenly sees the code in everything he looks at while in the matrix. It’s a transformative experience —-he is the master of his domain.

I felt like Neo when I began to understand the basics of Belgian beer styles. The Belgian section of a store or menu can seem daunting with all the numbers (Rochefort) and color-coded labels (Chimay) and styles (dubbel and tripel). And what’s a quadrupel anyway?

Before I look at the individual styles, I want to mention the common ingredient in most Belgian beers that gives them a character all their own — yeast. Belgian yeast is distinctive, imparting a uniquely fruity flavor that can sometimes seem spicy, like black pepper or clove. When non-Belgian breweries make Belgian-styled beers, they do so with this special yeast.

The large numbers on bottles or bottle caps and colored labels are a handy code devised by brewers as a short hand for their styles. I’ve read that the numbers refer essentially to the ABV of an original recipe, but that current recipes for these styles have different amounts of alcohol. I have also read that they do not refer to anything, but are merely representative for a particular brewery. For instance, Rochefort uses a “6” to denote their dubbel, while Westvleteren uses an “8”. Though unscientific, color and numeric coding can help you choose the right beer when you know what else to look for.

Let’s look at the four categories and the beers that represent them. 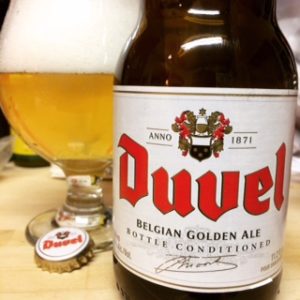 Belgian Strong Golden Ale
This beer is light in color, hence the name, with mild bitterness and high effervescence. Though relatively high in alcohol at around 9 percent ABV, these beers don’t taste like it. The original strong golden ale is our example, Duvel.

Duvel (ABV: 8.5 percent)
The aroma is mildly spicy with some citrus evident as you take the first sip. The taste that follows blends the spice with a citrusy bitterness from the small amount of hops that shine through. Overall, it’s no surprise that Duvel is a clean, pleasant beer. If you’re looking to have this with a meal, it pairs well with a wide variety of dishes.

Dubbel Ale
This beer pours a dark brown with fairly high effervescence. Generally, dubbels are malty with a slight sweetness, though not all will exhibit this sweetness. They tend to be slightly high in alcohol hovering around 8 percent ABV, which is not apparent in the flavor. 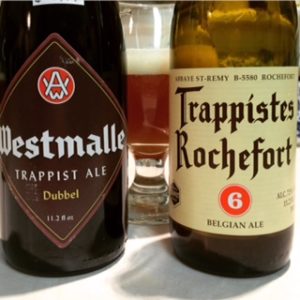 Westmalle Dubbel (ABV: 7 percent)
One of seven classic Trappist breweries, Westmalle was founded in 1794, but got an upgrade in 1930 when it created much of the lineup that they make today. Their dubbel has a tropical fruit aroma thanks to the yeast. The taste starts out as brown sugar and raisin, but transitions to the tropical fruitiness that was evident in the aroma. As this dubbel warms, cereal flavors from the malt begin to balance out the fruit. Pair this complex, hearty beer with equally hearty fare and you’ll do well.

Tripel Ale
Tripels are golden in color and tend to be more complex than the strong golden ale above. They often balance maltiness with hop bitterness and yeast fruitiness. At around 9 percent ABV, tripels tend to be on the high alcohol side, which can be evident in an alcohol sweetness.

Unibroue La Fin Du Monde Tripel (ABV: 9 percent)
Unibroue is proof that a classic Belgian style can thrive across the ocean, miles from Belgium. Though Unibroue is not alone in North America in creating great beers that harken to the beers of Flanders, they have been doing so since 1990. La Fin Du Monde is actually a pretty straightforward tripel. It pours a light golden color with high effervescence. The aroma is a very spicy clove that continues in the taste, but balances with a malty backbone. There is an alcohol sweetness in the aftertaste that is slight and inoffensive. This tripel is a good go-to beer for BBQ or steamed crabs.

Belgian Strong Dark Ale (aka Quadrupel)
Though now referred to as quadrupels or quads by many breweries, possibly as a way to relate them to dubbels and tripels, strong dark ales are a broad category of dark, high alcohol beers. They are characterized by very high alcohol — from around 10 percent and up — and malty with very little bitterness.

Chimay (Blue) Grand Reserve (ABV: 9 percent)
Chimay joins Westmalle as one of the seven Trappist breweries that brew authentic Trappist ales. This classic dark ale was originally brewed as a Christmas ale, but transitioned to a year round beer joining it’s fellow red (dubbel) and white (tripel) labels. The aroma is hazelnut and caramel. While still cold, the taste is nutty with a brown sugar sweetness, but as it warms it takes on a malty sweetness. Strong dark ales, like this one, will pair nicely with hard cheeses or even chocolate desserts.