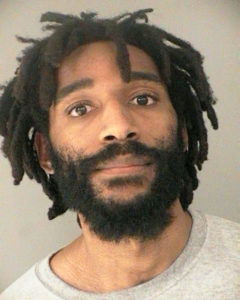 (Updated at 11:30 a.m.) A jury has sentenced a man to life in prison without parole for the June 2013 machete attack on two homeless brothers outside Arlington Central Library.

Derrick Sutherland, 30, was convicted of aggravated malicious wounding for attacking twins Brian and Tim Kern while they were sleeping outside on June 24, 2013, sending both to the hospital with serious injuries. Sutherland was also homeless at the time, and he was “known to carry a machete,” according to police.

“What broke this case open was some great police work,” Lynch told ARLnow.com this morning. “Officer Stephanie Rodriguez was on the ball that night, she went to where Brian was. She remembered that 48 hours earlier, she went to that very same place and encountered a guy with dreadlocks, a Jamaican accent and a pink shirt, and he was homeless.”

After searching for several hours, police located Sutherland near Wilson Blvd and N. Piedmont Street, a few blocks from where the attack took place. Within the previous six months, Sutherland had been convicted twice on weapons charges, once for carrying a concealed Bowie knife and once for brandishing a machete or Bowie knife, Lynch said.

Just days before the attack, three officers had encountered Sutherland and confiscated a machete, which Sutherland said he needed to protect himself. At two separate points since the attack, Lynch said, Sutherland was ruled mentally incompetent and had to be treated at a state mental facility in Staunton.

According to the Washington Post, Tim Kern suffered a broken collarbone and an injured knee during the attack. He also required staples in his shoulder and stitches in his arm. Tim also suffered a cut on the back of his neck that went through “his skin, his fat, his muscle all the way to the muscle surrounding the spinal cord,” Lynch said. “It was deep and it was long. I categorized it as an attempt to decapitate him.”

Brian Kern lost the vision in one of his eyes, and both of his wrists and three fingers were broken in the attacks. He also suffered large wounds to both of his hands, and Lynch said he had to learn how to write left-handed because of the injuries to his right hand.

Tim Kern died in a homeless shelter two months after he was attacked, but the machete wounds he suffered “did not contribute directly to his death.” He and his brother were 26 at the time. Brian, now 28 and living with a family friend, testified against Sutherland during the trial.

“The victim showed a lot of patience,” Lynch said. “June 24, 2013, was a long time ago. He showed courage throughout. Just surviving and getting up and testifying showed a lot of courage.”