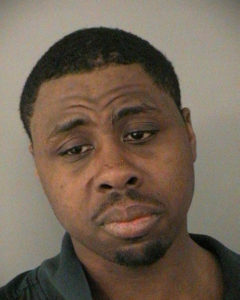 (Updated at 4:10 p.m.) A convicted felon put a knife to the throat of a 7-Eleven clerk in Lyon Park early this morning, then tried to carjack a delivery truck at gunpoint before ditching the gun and running off into the neighborhood, according to police.

The incident happened around 2:15 a.m., in the midst of this morning’s snow storm, at the 7-Eleven store at 2704 Washington Blvd.

Police say Antonius Sallis, 33, held up the store, putting a knife to the throat of a clerk with one hand while holding a handgun in his other hand. Sallis demanded Newport cigarettes and cash, then slashed the clerk’s neck before leaving the store, Arlington County Police said in a press release.

A delivery truck driver witnessed the robbery, police said, then was robbed himself. The driver told investigators that Sallis demanded his wallet and tried to steal the truck.

Police say the getaway was foiled when Sallis could not disengage the truck’s airbrake, at which point he took off running into the neighborhood.

Officers tracked him down and after a brief foot chase, Sallis was arrested, ACPD spokesman Lt. Kip Malcolm said. He’s charged with two counts of armed robbery, malicious wounding, abduction, carjacking and being felon in possession of a firearm.

Police and canine units searched for hours after the robbery to find the gun. Just before 3:00 p.m., an officer found it, along with “some other evidence” in the backyard of a house on the 300 block of N. Fillmore Street, Malcolm said.

“Officers during their evening shift briefing were told the suspected path the suspect traveled,” Malcolm said. “About two blocks behind the 7-Eleven, an officer spotted it.”

Sallis, who police say is homeless, is being held without bond in the Arlington County Detention Center.

Earlier, police said Sallis — who has retained a lawyer — was being uncooperative as officers searched for the weapon.

“We did searches with canines, patrolled the area… We’ve looked everywhere we can, but we’re only 360 police officers and not all of us are in,” Malcolm told ARLnow.com earlier today. “We’re asking the community to be mindful and look for the firearm. It could be in the snow, in a trash can, in a storm sewer.

“We’re most concerned about kids finding the firearm,” Malcolm said. “We really need to find this.”

Police recovered the knife and other evidence when they apprehended Sallis, Malcolm noted.