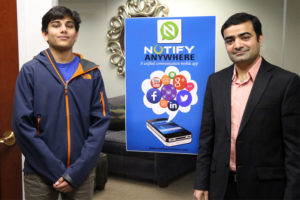 There are billions of people on the planet with no access to Internet. Ajay Maheshwari wants to connect to all of them.

Maheshwari is the founder and CEO of Notify Anywhere, a mobile platform that allows users to notify a list of contacts or subscribers in a wide range of ways, from social media to email to text or phone messages. It can be used for restaurants to tell customers about specials, coaches to tell players about practice cancellations or family members to reach out in case of emergency.

“There is a need of a platform to provide people with a unified notification medium,” Maheshwari said from Rosslyn, in his borrowed space from Notify Anywhere’s mentor company, Miracle Systems.

Maheshwari’s example of a coach notifying a team is personal — his wife was taking his daughter to soccer practice in Ashburn one rainy morning. They hadn’t heard from the coach so they assumed practice was still happening. The Maheshwaris arrived to an empty practice field and, when they got the coach on the phone, were told that he had no way of contacting all the parents.

“I decided we needed to come up with an automated critical process, triggered at an event so users don’t feel like it’s a burden to notify people,” Maheshwari said. “People want a simple thing. They want to reach their audience, irrespective of the network.” 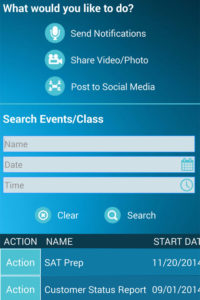 Seven months ago, Maheshwari formed the company with his cofounder, who goes by Shikha, applied for a patent and got to work. He brought on a developer, like many startups, but his is unique. Sahaj Sharda and Maheshwari met at a “hack-a-thon” in D.C. after Sharda’s team impressed with a quick-built app to “make children accessible to the education industry.” Maheshwari saw it, was impressed, and brought him on board.

Sharda is 16, and his team was a group of his classmates from Thomas Jefferson High School in Fairfax County.

“I was excited about the idea,” Sharda said. “It was similar to what we had built. When you’re developing anything, you’re looking at your target audience. Ours don’t have Internet access, but they’re still in the community at large. It’s a big problem in terms of accessibility.”

That’s why one of Notify Anywhere’s key selling points is its partnership with global telecommunications providers. In more than 200 countries, the app can access the phone infrastructure, allowing users to send voice and text messages over a network instead of requiring both end-users to download the app.

The infrastructure access and ability to send “robo-calls” sets the app apart, Maheshwari says. It’s is cloud-based, syncs with the phone’s contacts

“We don’t have any direct competition,” he said. “I don’t see any other companies doing it.”

Notify Anywhere is currently in a beta test, and Maheshwari said the response is “overwhelming.” He expects to hit the open market by April.

To this point, Notify Anywhere has been bootstrapped by the former federal government employee, and funded with friends and family money. As the launch date approaches, the company is seeking angel investors and venture capitalists to inject funding for engineering, marketing and sales.

The app will be Android-only to start, but an iPhone app isn’t far behind. It will be free for most users, and, in less than two months, live and “fully-formed.”