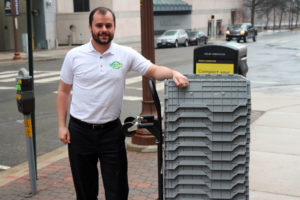 Adam Genest had wanted to be an entrepreneur his whole life after hearing about the successful businesses his grandfather and father started.

A previous venture, and e-commerce platform, failed. Genest belonged to an entrepreneurship group and was looking for the next big idea when a friend suggested an idea he saw in Arizona, about renting crates out to movers. Genest thought about his own moving experience to an apartment in Rosslyn, and knew right away the idea had legs.

He bought 10 crates and a dolly and launched a website. ValueCrates was born.

Genest started with just the 10 crates and dolly when he launched in October 2014, and he said he’s been sold out since the first weekend.

“I knew the business made such good sense that I had to try it,” he said. “I’ve turned down over 1,000 crate orders because I’ve been sold out. This was achieving a level of success I hadn’t achieved before.”

Genest didn’t launch ValueCrates with a startup blueprint: build a value proposition, create a minimum viable product, beta test it and always build to scale. Instead, he launched as soon as he could and was glad to do things inefficiently early on. Many business advisors might pull their hair out hearing how many customers Genest has turned away; Genest said he’s been focused on keeping the customer’s he’s had happy.

“I meet every one of our customers,” he said. “I get to talk to them and see how we’re helping them. I ask them questions about the business, and they feel, and I know, that they’re not just numbers.”

Each crate is 23.5-by-15.7-by-12.4 inches and can hold a maximum of 80 pounds. Genest offers one size crate and one size dolly, keeping his costs and options simple, and keeping prices low. When he’s asked customers what they think of the price, some have said he should raise it. 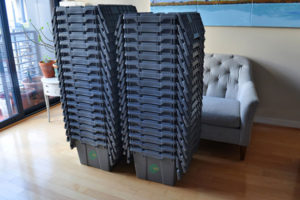 Despite the low prices, ValueCrates is profitable and completely bootstrapped, Genest says. It’s still run out of his apartment, which would be more of a problem for he and his wife if the crates weren’t consistently sold out. Despite Genest’s satisfaction with building a company without regards to scale or efficiency, it’s a situation that cannot last.

Now the successful entrepreneur is in the market for storage space and is in talks with manufacturers in China. He’s been buying crates and dollies from Home Depot to this point, not a practical solution considering he eventually has eyes on servicing multiple cities. He says that’s still a ways away.

Genest is still telling too many customers for his liking that he has no crates available — “turning down orders sucks,” he said frankly — so he’s looking for $200,000 in investment to scale faster.

ValueCrates has strayed from the traditional startup blueprint, but Genest thinks there are lessons he’s learned that can translate to any business.

“I learned it’s OK not to be scalable and profit-focused right away,” he said. “I would have made mistakes, would have rushed it … the only reason I’m successful is because of the mistakes I’ve made in the past.”