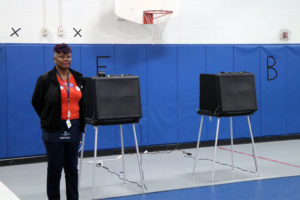 Voting in Arlington will go back to the future this year when the county introduces paper balloting to replace the touch-screen boxes it has been using for years.

The paper ballots will be digitally scanned and allow more voters to vote faster, and provide a hard copy of ballots in case of technical malfunctions, Arlington County said in a press release. It’s the first time the county has used paper ballots since 1950, county General Registrar Linda Lindberg told ARLnow.com.

The county was forced to make the purchases by a ruling by the Commissioner of Elections recommending the electronic WinVote machines be decertified and prohibited.

“Last week, without any notification to the users, the State Board of Elections said they had found ‘vulnerabilities with the machines,'” Lindberg said. “This late-night press release that they did very publicly without our knowledge has basically killed the machines for us.”

When asked what problems Arlington had encountered with the touch-screen machines, in use in the county since 2003, Lindberg said “nothing.”

Arlington had already planned on purchasing paper ballots and digital scanners next year. A 2007 law passed by the General Assembly requires all localities, when procuring new voting equipment, to eschew electronic machines for paper ballots.

Arlington will now have to come up with $750,000 to purchase 60 digital scanners — one for each of the 53 votings precincts with extras for absentee ballots and training — in the FY 2016 budget, which the Arlington County Board will adopt next week.

“This is the minimal amount we can get by on for the time being,” Lindberg said. Next year, her office will have to spend hundreds of thousands of additional dollars procuring extra machines and equipment for a presidential election year, which means a much greater influx of absentee ballots.

The first election the paper ballots will be used for is the June Democratic primary for County Board. On May 9, from 9:00 a.m. to 3:00 p.m., Lindberg’s office will be hosting an open house to explain the new balloting system on the ground floor of 2100 Clarendon Blvd.

In 1950, Arlington switched from paper ballots to the lever machines, where voters had to go into a booth and pull a curtain behind them. In 1991, the county introduced its first electronic machines — bulky, “but very reliable,” Lindberg said — and in 2003 they starting using the touch-screen system that is now obsolete.