Full disclosure: I have not been a fan of sours in the past. I took on this little challenge as an opportunity to broaden my palate. It worked, sort of.

I tasted four sours: two European and two American. Like with IPAs, American craft breweries have gone to extremes with sours. Where the two Flemish sours that I tried mixed the sweet, maltiness of brown ales with a fruity tang, the American sours were all sour.

Traditionally, sour beers like Flanders reds, oud bruins and Berlinner Weisse were aged in vertical wood barrels, called foeders, where the beer interacted with so-called acidifying bacteria — like lactobacillus — resulting in a souring of the beer. This was desired. European breweries blend aged sour beer or lambics — “wild” beers that use a combination of wild yeast and bacteria for their sourness — with young beer. The result is a beer that still has many of the flavors of a brown or red ale, but with a lactic sourness.

According to The Oxford Companion to Beer, American craft breweries are forging new roads into the world of sours. Dubbed “new world” sours, these beers are as varied as the ingredients that are used in them. One of the beers in this column is inspired by the “old world” sours, but it lacks any of the subtleness of them. The other American sour here uses blood oranges to bring a big citrus tang to an otherwise “old world” style, the gose. 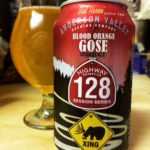 Anderson Valley Brewing Company Blood Orange Gose (4.2 percent ABV)
This is the gose — a wheat beer brewed with salt and coriander. The sourness comes from the addition of lactobacillus and a large number of blood oranges. In the glass, the aroma is reminiscent of sodium bicarbonate — a flat, Alka-Selzer-like scent — with just a hint of bitter orange. The flavor is nearly all sour! You get a big citrusy sourness from the oranges, which tapers off to a lightly sweet biscuit flavor in the finish. This is a refreshing, sessionable beer that will be perfect in the heat of a summer day. 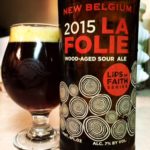 New Belgium Brewing Company La Folie 2015 (7 percent ABV)
This beer makes claims to the long lineage of European sours — Flanders reds and oud bruins. It’s made using a blend of aged sour beers that New Belgium is nurturing. Starting out as lagers, the component beers sour over time in wood foeders. Each one has a different character so that when they are blended you get this complex sour beer. The aroma is tart plum with a hint of the sodium bicarbonate. In the mouth, it’s entirely plum and other dark stone fruit with little to no sweetness, lightened by an effervescent carbonation. This is a strong, funky beer. Alex from Dominion Wine & Beer suggests letting this one age before opening it. 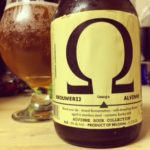 BROUWERIJ ALVINNE Omega Sour Blond Ale (6 percent ABV)
Omega is a Flemish sour beer that uses a blond ale instead of the traditional brown ale in the blend. Alvinne bills itself as a craft brewery in Belgium and it shows in its varied line up of beers. This beer has a fantastic winey and biscuity aroma that hints at the complexity of the flavor. There’s no doubt that this is a sour from the first sip. Starting out strong, the sourness mellows to become fruity right before the sweetness of the malt kicks in. I found the journey from sour to almost sweet made this beer really stand out. 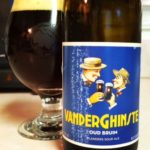 Vanderghinste Brewery Oud Bruin (5.5 percent ABV)
This Flemish brown ale is a sour is made in the Flanders tradition. Originally called “Ouden Tripel,” Vanderghinste gave Oud Bruin a makeover, including a rename, and found success. Oud Bruin is a brown ale that is blended with an oak-aged lambic to create the Flemish sour brown ale. The aroma is of prune and cinnamon apple. The flavor derives from the lambic and from the yeast — tart stone fruit that sweetens in the finish. This traditional sour was actually the least sour of the group. I enjoyed it immensely as a drinkable sour ale. This approachability and the trend toward sours has made the demand for Vanderghinste’s Oud Bruin so great that the brewery has announced plans to expand.

What are you drinking? Cheers!

END_OF_DOCUMENT_TOKEN_TO_BE_REPLACED

More Stories
Open Houses in Arlington This WeekendCrime Report: Assault Near the Pike