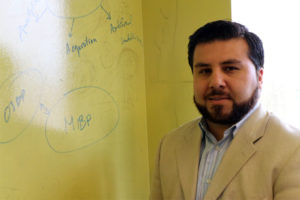 Ahmad Ishaq immigrated to the United States when he was little, fleeing Afghanistan with his parents for political asylum from the Soviet Union. He grew up in Southern California, developed an American accent and a laid-back, West Coast disposition.

Now, he’s leading one of Arlington’s fastest growing companies, going from five employees just a few years ago to close to 100 by the end of 2015. Ishaq is the founder and CEO of ByteCubed, a government contractor and consulting business focused on ensuring the best decisions possible for its clients.

“I came from a very poor family, lived a really modest lifestyle,” he said from ByteCubed’s space in Carr Workplaces in Clarendon. “That helped mold me into being very driven. I’ve always been thinking what I can do bigger.”

Ishaq moved the area for an internship with the Defense Intelligence Agency. That internship turned into a full-time job, where he continued to push up the ladder. He left the government to work as a director at Mantech International, but after a year there he struck out on his own.

“I wanted to solve the Big Data problem,” he said. “I wanted to figure out how to take information out of classified documents, analyze it and feed it back to the government so they can make better decisions.”

In 2010, he started to “build the infrastructure” of his fledgling company, holding off on growth while he did so. He took a subcontract with the Computer Sciences Corporation for data analytics. That contract allowed him to hire a handful of employees and get ready to land the big deal. 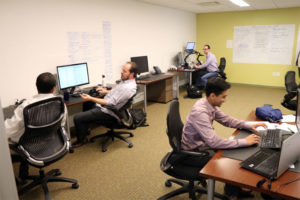 In 2014, after years of working on his proposal, Ishaq secured a $325 million contract with Department of Defense in October. Since then, he’s hired 30 people and plans to hire as many as 50 by the time the year is over. ByteCubed is already the biggest tenant in Carr Workplaces, occupying several different offices in the coworking space.

Soon, they will move to Crystal City, after Ishaq was personally courted by Vornado/Charles E. Smith President Mitchell Schear. Their new, 6,000-square-foot space is along Crystal Drive, and ByteCubed will have plenty of opportunities to grow.

Other than the $325 million contract, ByteCubed also works with a handful of private companies. He also secured the contract to help administer $1 billion a year through the DoD’s Small Business Innovation Research fund, which gives grants to private companies to develop new technologies.

“We’re helping the government make better, smarter purchases by aggregating the data and automating the processes,” he said.

It’s a simple enough concept, but one the government has had problems with in the past. That’s a big issue, Ishaq said, considering the government spends as much as $70 billion a year for research and development.

“A lot of times, people get a problem, come up with a quick, fast solution and it ends up being terrible,” he said. “Our solution is addressing the bigger problem of the government looking for a quick fix.” 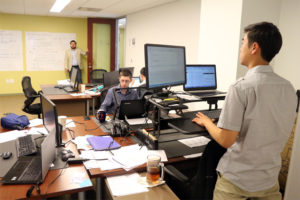 ByteCubed is chasing 10 different government contracts that will be awarded over the next 12 months. If the company lands just one of them, “we will double in size,” Ishaq said. Those contracts will all focus on the niche Ishaq has targeted for his company: “increasing innovation or reducing inefficiencies.”

That, he said, is the way he’s found to give back to the country that gave his family a safe place to live when he was a boy.

“A lot of people in similar situations appreciate the fact that we were given a second chance, and feel very invested in giving something back,” he said. “It’s why I’ve always been focused on solving government needs and problems.”