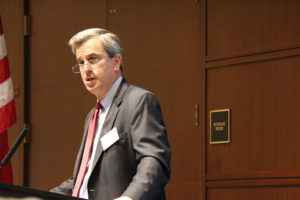 In order for Virginia to move forward on issues like medicaid expansion and climate change, more Democrats need to be elected to House of Delegates, said Democratic House of Delegates candidates Del. Patrick Hope, Del. Rip Sullivan and Mark Levine.

The candidates spoke to the Arlington County Democratic Committee last night to announce their candidacy and touch on why they need Democratic support in the upcoming November election.

While all candidates spoke briefly on ideas they felt need attention, such as Medicaid expansion or better mental health care, most of the speeches focused on how Republicans in the House of Delegates were blocking important laws or passing laws that the candidates said would be dangerous for Virginia.

Republicans have refused to allow any conversation about Medicaid expansion in the General Assembly, Sullivan said.

Sullivan, who is running unopposed for the 48th District seat, warned that Republicans were also very close to passing “dangerous” legislation last year. He cited a proposed bill that would legalize switchblades, ninja stars and spring-loaded weapons that he said “flew” through House committees. He said the bill would have passed the House of Delegates, but Republican majority reversed their opinions, a move he attributed to it being a reelection year.

In order to get more Democrats elected, the three candidates plan to talk to Virginia residents in areas that elect Republicans. Levine, who is thus far running unopposed for the 45th District, announced that he would be making a trip around Virginia to talk to residents and boost Democratic candidates.

“We’ve got to elect more Democrats, not just in Arlington, but in the Commonwealth of Virginia,” he said.

Levine recently argued for more gun control at conservative conference in Denver, Colorado and said that he was able to convince some National Rifle Administration members to think about stricter gun regulations, such as better background checks. If elected, Levine said he also wants to start talking about mental health, education and jail time for drug users.

“We put too many people in jail. I don’t think non-violent drug users should go to jail,” he said.