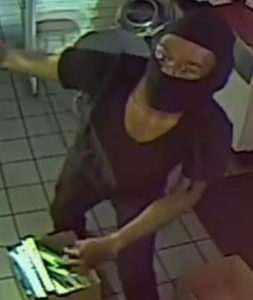 The Arlington County Police Department is looking for a suspect who was caught on camera during a gas station burglary in the Leeway Overlee neighborhood.

Police say that a man smashed in the glass door of the Shell service station at 5630 Lee Highway around 6 a.m. on Aug. 19. He was seen on camera placing cartons of cigars and cigarettes into a cardboard box.

“The suspect is described as a black male with an athletic build and had chest length dreadlocks,” police said in a press release today. “He was wearing a black v-neck t-shirt, denim jeans and dark sneakers at the time of the incident. In one of the surveillance images, a tattoo is captured on the subject’s upper right arm.”

Anyone with information about the robbery or suspect can contact Detective James Stone at [email protected] or at 703-228-4245. Information can also be reported anonymously by calling the Arlington County Crime Solvers hotline at 1-866-411-TIPS (8477).