Behind Dulles International Airport sits a 5-month-old brewery called Ocelot Brewing Company. Even though it’s young, it still feels comfortable and inviting. When you walk into the space, you are greeted by a colorful wall of brewery stickers before you enter the spacious tap room. Long tables with plenty of stools make up the bulk of the seating that isn’t located along the expansive bar. Above the bank of taps is the tap list, colorfully illustrated in chalk. 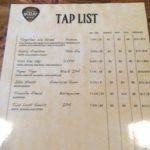 To the left of the tap list is the logo for Ocelot, a guitar pick with an ocelot gracefully leaping over the name. The guitar pick is no coincidence — the owners take the spirit of rock n’ roll, its rebellion and constant change, to heart. While there are murals to honor the likes of Led Zeppelin and Pink Floyd on the wall and music playing, the spirit of rock n’ roll is in their brewing. They are not interested in creating core beers that can be embellished here and there, but rather in brewing what they want when they want. That’s rock n’ roll.
Ocelot’s owners think big. The only volume they’re interested in is the loudness of their beers. Keeping the batches small, Ocelot brews big beers — sometimes making imperials out of styles that typically stay pretty tame. For instance, they’re planning on making an imperial Kölsch — a light blend of lager and ale. 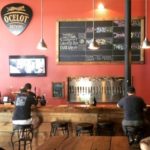 The day I visited was a relatively quiet one, but there were quite a few patrons — many regulars — enjoying flights or individual pours of their choice of seven beers. Some customers lined up at Big Frank’s BBQ truck parked outside to get food to eat in the tap room. In a large open space, several customers played corn hole, adding to the festive atmosphere. It was easy to like the place and the people who make it a reality.

Several of Ocelot Brewing Company’s beers can be found on tap from time to time at Dominion Wine and Beer. The first three below are the most likely to be found. The rest are worth visiting Dulles to enjoy.

Two Lost Souls IPA (7.3% ABV)
This IPA is a perfect example of Ocelot’s ethos — one could mistake it for an imperial IPA. However, it passes as a regular IPA here. This is one is brewed with Mosaic and Citra hops giving it a larger-than-life grapefruit aroma that is spiced up slightly by pine. That’s just the aroma. I tasted white grapefruit with a hint of black pepper — making this big IPA a deliciously tart and bitter brew. The tartness gives way to a slight sweetness in the finish. I liked this one so much that I was ready to take home a growler of it, but it has been so popular lately that they ran out of bottles.

Together We Stand Saison collaboration with Crooked Run Brewing (7.3% ABV)
It makes complete sense that Ocelot would choose to collaborate with a farm brewery when they want to make a saison, a Belgian farmhouse style. In addition to the standard Belgian yeast, this beer is made with Citra hops and grapefruit — an addition that completely transforms it. The aroma is true to the style: a combination of banana and clove from the yeast. But the flavor takes this beer beyond the lightly spiced and effervescence of a typical saison. There’s still a pleasant amount of carbonation, but the spice is replaced by tart, unsweetened pineapple. Together We Stand is light and refreshing and a fun departure from the expected saison.

Paper Tiger Black IPA (7.1% ABV)
Recently, I have come to really appreciate the complexity in bitterness that a black IPA can bring. You have the obvious bittering from the hops (it is an IPA, after all), but then you get a different kind of bitterness from the black patent malt. The black malt brings a charred quality, the backbone of the chocolate or coffee flavor found in a traditional stout. Ocelot’s black IPA did not disappoint with it’s own complex aroma — there was the char, almost like charred steak, but there was also a cumin-like spice and pine (both likely products of the hops). The flavor, though two-part, was more straightforward — bittering came from both the malt and the hops. This was very drinkable despite its bitterness and its alcohol content. It was also a table favorite. 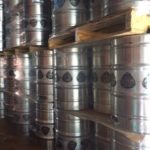 I’d recommend any of their beers, but the following two beers may be harder to find outside their tap room. The first is their sour saison, Idle Hands, a 5.1% ABV sour that didn’t overpower. I smelled apple cider vinegar and baking soda before taking my first sip. The flavor that followed was of unsweetened apple cider that transitioned into tart plum in the finish. This beer was a fine balance of sour and drinkability for someone like me who doesn’t love sours.

The second of their smaller batch beers is the barleywine, Trouble Ahead, an 11.5% ABV whale that very well could spell “trouble ahead” if you’re not careful. I got a delightful raisin bread aroma, then a flavor that was equal parts sweet caramel and bitter hops. The clearly high alcohol amount was well hidden by the balanced flavor. Trouble Ahead is one of the more drinkable barleywines I’ve had recently. Talk about rock n’ roll, what’s more rock n’ roll than brewing a January beer in July!?