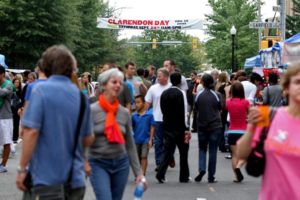 Music and the smell of chili will fill the air around the Clarendon Metro station on Saturday, Sept. 26 for the 18th annual Clarendon Day.

There will be arts and crafts, food, beer, music and the annual chili cookoff, all on Clarendon and Wilson Blvds outside the Clarendon Metro station. The free festival will be open from 11 a.m. to 6 p.m., an hour longer than previous years.

There will about 25 bands playing across four stages, with the headliner Slam Allen Band playing blues and soul on the Main Stage at 4:30 p.m.

“Slam Allen is not only pretty good, he is taking the blues world by storm having sat at No. 1 on the Roots Music Report Blues List for 16 straight weeks with top single and album,” said Anders Thueson with Songs, Writers and Poets, one of the festival’s sponsors.

Slam Allen will play until 6 p.m., but the other four stages, including one dedicated to dance performances, will close at 5 p.m., said Matt Hussmann, executive director of the Clarendon Alliance.

For the third year in a row, Clarendon Day is also home to the annual chili cookoff, sanctioned by the International Chili Society and sponsored by Hard Times Cafe.

Members of the chili society will enter their best recipes for red chili, chili verde, salsa and homestyle chili in hopes of winning and moving on the the World Championship Chili Cookoff this October in Palm Springs, California. Proceeds from the cookoff will benefit Wounded Warriors, Hussman said.

Chefs will be giving samples of their chili, but there plenty of other food options from local restaurants, including Bowl’d, Circa at Clarendon, Fuego Cocina y Tequileria and Liberty Tavern, Hussman said. Top Chef contestant Mike Isabella will be selling food from his three Ballston restaurants — Kapnos Taverna, Pepita Cantina and Yona.

In addition, there will be arts and crafts booths and a kids zone with rides, music, storytelling and face painting.