With this declaration at the tapping of the first keg, Oktoberfest has officially begun.

It’s Oktoberfest time of year again. Just wrapping up in Munich, the home of the official and original Oktoberfest celebration, we will see Americanized versions pop up through the month of October. It’s appropriate then that the Oktoberfest style of beer — more than the ubiquitous pumpkin beers that start arriving in stores in July — represents Autumn beer to me.

In 1810, King Joseph held a two-day festival to celebrate the wedding of his son, the crown prince Ludwig. Those two days has expanded into an annual carnival-like festival that runs for 16 days from September into October. It’s a massive celebration of beer, German history and culture. While there’s plenty of beer — mostly but not exclusively the Oktoberfest style — there are also carnival rides, performances and religious ceremonies.

Despite the other attractions, beer is the centerpiece of the event. According to The Oxford Companion to Beer, only six breweries hold contracts to supply the beer to Munich’s Oktoberfest: Augustinerbraü München, Hacker-Pschorr, Hofbraü, Löwenbraü, Paulaner and Spaten-Franziskaner-Braü. These supplier represent the largest breweries who brewing inside the Munich city limits. In fact, the style designation “Oktoberfest” is a protected appellation in Germany and can only be used by Munich-based breweries.

An Oktoberfest-style beer is a Munich-style lager — meaning that it’s brewed with a malt that has been roasted longer, which is typical of Munich malt. The result is an amber beer that combines both the clean cracker-like maltiness of a lager with the caramel sweetness of the toasted Munich malt. For years, the beer of choice served at Oktoberfest was the Munich style Märzen — a March-brewed beer that tended to be stronger so that it could lager through the warm summer months. Some of the official varieties of Oktoberfest still pay homage to the Märzen style on their packaging, but they are no longer the same style of beer.

Though a traditional German style, I still think of Samuel Adams’ Oktoberfest when I think of these beers. In fact, it’s emergence in stores and restaurants in September is a clear marker of Fall for me. Other American breweries make Oktoberfest beers — typically staying as close to the traditionally malty lager as possible.

Look for these Oktoberfest beers in stores while they last: 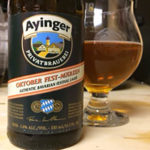 This traditional, authentic Oktoberfest-style lager is not actually served in the official festival in Munich as the brewery is located outside the city limits. However, they are allowed to use the name and even organize their own festivals in other cities. I particularly liked this one despite, or maybe because of, its outsider status. The sweetness is quite pronounced in this beer with a honey-like flavor. 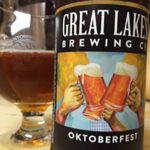 The most “Americanized” of the Oktoberfests I tried with its higher ABV, Great Lakes still manages to honor the caramel maltiness of the traditional Fall lager. This limited release seasonal has quite a large following — get some before they’re gone.

The flagship Fall seasonal for Samuel Adams, their Octoberfest (spelled the anglicized way) holds pretty true to the traditional varieties in Germany. Since 2012, Samuel Adams has held a national Stein Hoisting Competition to promote their Octoberfest beer. While participants can compete from anywhere, the main event is held at Oktoberfest Zinzinnati in Cincinnati, Ohio — the largest Oktoberfest outside of Munich. 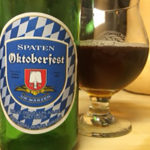 Spaten, owned by Anheuser-Busch InBev, is one of the six official breweries that supply beer for Munich’s Oktoberfest. This Oktoberfest is a straightforward offering.