Editor’s Note: This biweekly column is sponsored by Dominion Wine and Beer (107 Rowell Court, Falls Church). It is written by Garrett Cruce, a Cicerone Program Certified Beer Server, who also writes about beer on his own blog: beerbeltway.wordpress.com. Catch new posts there on Sundays.

Maybe you haven’t heeded the call of Starbucks — or Target, malls or CVS — to begin thinking about the Christmas holiday season since Halloween. Perhaps, the latest deliveries of Winter warmers to your local beer store will begin to put you in the spirit.

When seasonal beers like pumpkin ales hilariously creep into summer months — Pumking, I’m looking at you — it’s refreshing to have a seasonal beer that shows up on time. The earliest winter beer I saw this year was Port City Brewing Company’s Tidings, which was delivering to Dominion Wine and Beer on Veterans Day. Since I was still finishing my coffee in the ubiquitous Starbucks red cup, I figured the timing was just fine.

There is no right or codified style of winter warmer, which is what I like most about this category of beer. While this lack of direction can make selecting the right seasonal brew for you, a little label knowledge will help. The main varieties of winter beer are: fresh-hopped ales, English strong ales, Belgian-style strong dark ales, spiced brown ales and sometimes special lagers.

English strong ales and Belgian-style strong dark ales (sometimes called quadruple ales or quads) differ in many ways, but their common ground is in the malty sweetness and the warming effect that the alcohol has. Though not usually hop-forward, some English strong ales in the U.S. can balance their maltiness with hops. The Belgian-style variety tends to remain strong and sweet.

My wife thinks of spiced brown ales when she thinks of winter beers. In fact, the first winter brew I had was Harpoon Brewery’s Winter Warmer, a fine example of a spiced brown ale that uses cinnamon and nutmeg to evoke the season. Harpoon claims that their Winter Warmer was one of the first winter seasonals on the market. Though spiced ales don’t dominate the Winter seasonal category anymore, they are still an enjoyable part.

Though lagers were traditionally brewed in winter in Europe because of temperature control needs, in the contemporary U.S. craft beer market winter lagers are not too common. There are a handful of winter seasonal lagers that stand out for this reason: Boston Beer Company makes a Winter Lager and Dogfish Head Craft Brewery makes its pear-infused Piercing Pils.

Winter beers also come in all shapes and sizes. Some breweries, like Stone Brewing Company and Anchor Brewing release magnums at this time of year. Others will offer bombers and 12 oz. bottles. I’ve grabbed a few 12 oz. offerings from Inside The Beer Beltway — one from Virginia, one from Maryland and one from Pennsylvania. 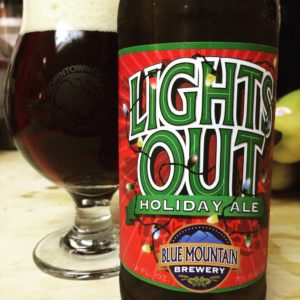 Lights Out is a very new world version of an English strong ale. It pours a dark molasses brown. The aroma is the first indication that something is different here: hops balance the malty biscuit. The sip starts out brown sugar sweet, but it’s nicely tempered by the spicy hop bitterness.

This beer is strong enough to warm you up without be too heavy or cloyingly sweet. Lights Out should be great at the Thanksgiving table or any other feast between now and the new year. 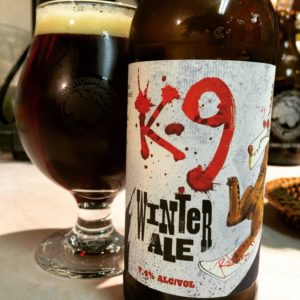 K-9 is also based on an English strong ale, but don’t feel bad if you get the tell-tale banana that comes from Belgian yeast. I did. I’m still not sure where I got banana in the aroma, but this is definitely Flying Dog’s nod to the traditional English style. The flavor brings together a light fruitiness, a rock candy sweetness and a light hop bitterness.

Despite my confusion, this beer does what it claims to — it’s a rough version of the style that it’s based on. Visually, K-9 pours a dark caramel brown with a generous head that stick around. Enjoy this beer with rich foods — cheese, gravy or bacon! 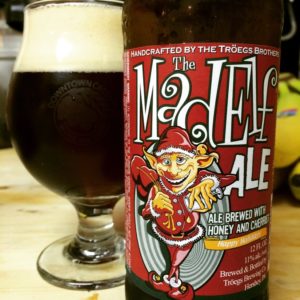 I’ve got a bit of a beef with this popular beer: I wonder why Tröegs avoids any mention of this being a Belgian-style strong dark ale or quad. I had to read the entry on their web site for Mad Elf to find actual reference to Belgian yeast — the bottle only mentions the descriptor spicy. Drinking this beer and reading the label on it made me feel as though I was in a time warp. I was reminded of the early days of microbreweries when it was OK to keep the information vague.

Not that it isn’t okay now, but beer drinkers have come a long way. We all deserve more clarity. That said, this crowd favorite beer is very tasty — and strong! Banana and cloves dominate the aroma, which is to be expected given the Belgian yeast. The flavor is all syrupy sweet up front, then the cherry flavor kicks in. The alcohol flavor is so subtle that it’s easy to forget what you’re dealing with. Enjoy this sweet sipper after your big meal, and relax!