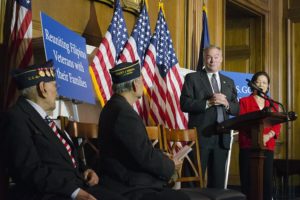 Who will presumptive Democratic presidential nominee Hillary Clinton choose as her running mate? Virginia Sen. Tim Kaine (D) is reportedly on the top of her resume pile.

Kaine, 58, is said to be the frontrunner among the people Clinton is considering as the Democratic National Convention nears its opening in Philadelphia next week.

So far, Kaine hasn’t given much indication as to whether Clinton might choose him, but there are signs that such a pick would make sense. Additionally, White House press secretary Josh Earnest said earlier this week that Kaine is someone President Obama would recommend for the job.

Kaine, who speaks Spanish, attended Harvard Law School and was a Catholic missionary before entering the political realm. He has served as Mayor of Richmond, Governor of Virginia and was elected to the senate in 2012.

Agriculture Secretary Tom Vilsack is the other top candidate for the job, the Washington Post reported.

Clinton is expected to choose her running mate “soon,” according to Hillary for America director Adam Parkhomenko:

Hillary will announce her running mate soon! Text VP to 47246 and be the first to know who she picks.