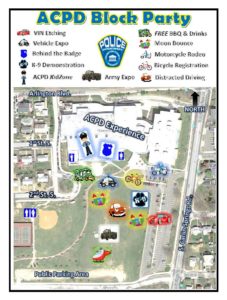 Arlington County Police Department officers are set to bond with locals over free barbecue, games and activities during a summer block party next week.

The police department is scheduled to host a summer block party at Kenmore Middle School (200 S. Carlin Springs Road) on Saturday, Aug. 27, from 9 a.m. to 4 p.m.

“This free event provides residents an opportunity to get to know their neighbors and police officers while enjoying interactive stations, safety demonstrations, entertainment, food and much more,” ACPD said in a press release.

Some of the events planned for this year’s block party include a police cruiser expo, K9 demonstration and a “mini academy” where attendees can try their hand at being a cop.

The party will also have a moon bounce and a “kid zone” with badge-making, a “need for speed” police driving experience and an area where kids can try on police gear.

Additionally, the celebration will have “lots of sauce” from Rocklands Barbeque, according to an ACPD promotional video:

It's not just free food at the Summer Block Party, it's @rocklandsbbq! Join us August 27 at @APSKenmore from 9 – 4! pic.twitter.com/7XJQ06Eg7h

END_OF_DOCUMENT_TOKEN_TO_BE_REPLACED

More Stories
APS: We Didn’t Even Apply for the Newsweek RankingAlexandria Man Charged With Exposing Himself on Blue Line Train in Arlington