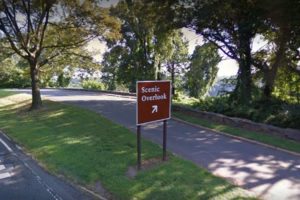 A pair of gun-wielding robbers forced a man to swim across the Potomac River after robbing him at a scenic spot along the George Washington Parkway yesterday evening.

The robbery happened last night near the first scenic overlook on the GW Parkway some time between 6 and 7 p.m., according to U.S. Park Police.

Two thieves armed with a gun took a man’s cell phone and wallet before telling him to swim across the Potomac, police said. The man was able to swim to the D.C. side of the river, where he told police what happened.

Though a search led to the detainment of two people, police released them “as they could not be positively identified as the attackers.”

A U.S. Park Police officer involved in the search was airlifted to the hospital due to “heat-related distress” but did not suffer any serious injuries.

Authorities are still searching for the robbers and have asked anyone with information regarding the crime to come forward.

The United States Park Police are investigating an armed robbery that occurred last night near the first scenic overlook on the George Washington Memorial Parkway. The victim was relieved of his wallet and cell phone before being forced to enter the Potomac River and told to swim across.

After reaching shore on the DC side of the river, the victim alerted police who immediately began a search of the area. Two suspects were detained and eventually released without charges as they could not be positively identified as the attackers.

During the course of the search, a USPP officer suffered heat-related distress and was transported by helicopter to a local hospital. The officer was later released without incident.

There is no further information at this time. If you have any information regarding this incident, please contact our detectives at 202-610-8730.