A Fairlington woman is honoring the anniversary of her sister’s passing in a unique way.

Jennifer Pearce lost her sister Nicole seven years ago in a car crash caused by drowsy driving. The driver of the car Nicole was in fell asleep and ran off the side of the road in West Virginia. Nicole, who was wearing her seat belt, died in the hospital.

To honor her memory, Pearce — along with family and friends — hid over a hundred smiley-face painted rocks around Fairlington last night, and hundreds more around the D.C. area and beyond.

“We have been very proactive about trying to get awareness awareness, my family will go to 95 and different rest stops and hand out coffee,” said Pearce. “I started doing this because the days just suck. My sister was such a bright and shiny happy person and it was so counter intuitive to try and live that way when your heart was broken.” 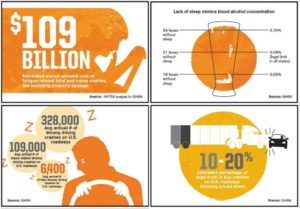 According to a study by the Governors Highway Safety Association, there are an estimated 6,400 deaths per year from people nodding off while driving, with more than 50 percent of drowsy driving crashes involving drivers who are 25 years old or younger.

For the past four years, Jennifer has given away small tokens on her sister’s birthday.

“We started with filling up mylar balloons and we would just hand them out to strangers. Smiley faces were her thing and it’s become sort of a holiday that’s brought back her spirit.”

She gave away smiley face balloons because smiley faces were Nicole’s favorite. This year she’s doing something different and has painted about 700 smiley face rocks that have been hidden all over the D.C. area — “and way beyond including Paris, South America and many other states and cities,” she said in a Facebook post.

Many were placed throughout north and south Fairlington, where Pearce lives.

“I hid a hundred rocks in Fairlington, I tried to hide some that were a little easier for kids, there were some I randomly put on car door handles, I hid some in the crevices of tree bases and near the pools, the tennis courts, the dog park, they’re kind of everywhere,” said Pearce.

“My staff is out at the zoo today and we’re going to Georgetown for lunch so they’ll be there. Whoever finds them, what they do with them or why they might need them that day is totally between them and the universe.”

More information about Nicole and the impact of drowsy driving can be found on a website created in her memory.