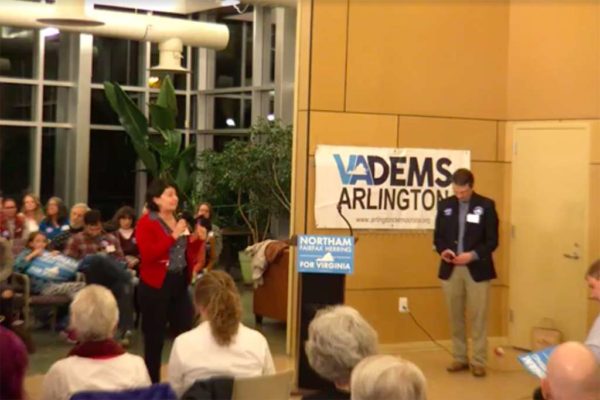 Speaking to more than 200 supporters at an Arlington County Democratic Committee rally alongside Democratic nominee for governor Ralph Northam, lieutenant governor candidate Justin Fairfax, Attorney General Mark Herring — who is running for re-election — and U.S. Sen. Cory Booker (D-N.J.), among others, Favola said that if Republican nominee Ed Gillespie becomes governor, it will be “dangerous.”

“My colleagues didn’t tell you how dangerous it will be if the other sides wins,” Favola said in a speech. “They’re evil, we’re the good guys… Every one of you is an angel. You’re not only fighting for yourselves, you’re fighting for hundreds of thousands of people in Virginia.”

(ACDC posted a video of the entire rally on its Facebook page. Favola’s remarks begin just before the 31:00 mark.)

The use of the word “evil” brought swift condemnation from Arlington GOP chair Jim Presswood, who pushed back on Favola’s statement.

Senator Barbara Favola crossed the line when she said that Virginia Republicans are “evil.”  This language goes well beyond the realm of civil debate and demeans the moral character of Republicans.

Senator Favola and other Arlington Democratic leaders often talk about “Arlington values.” There are indeed many values Arlingtonians across the political spectrum share, including cultural and ethnic diversity, good schools, a well-run public transit system, and the need for public parks. But Senator Favola apparently does not include ideological diversity in this list. The term “Arlington values” should not be code for Democratic values.

There are many Republicans who live in Arlington — about thirty-thousand people in the county voted for the Republican Congressional candidate last year. Senator Favola needs to remember, even during a heated political campaign, that we are her constituents too.

Now just saying out loud what their campaign has shown they think of millions of their fellow Virginians… https://t.co/BbU6g8C6Od