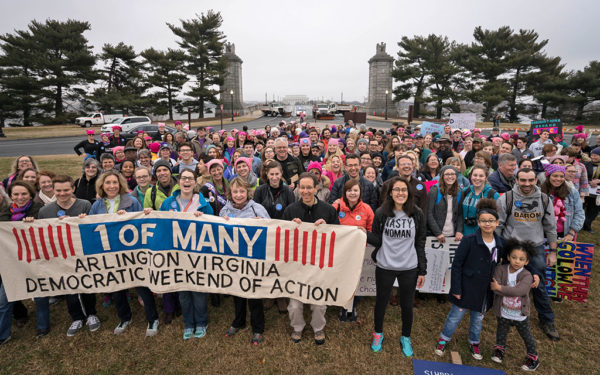 Rallying around the theme, “One of Many for a Commonsense Commonwealth,” local Democrats are mobilizing once again for the 2018 Women’s March on Jan. 20 in the nation’s capital.

The grassroots effort is part of a larger plan to harness energy inspiration from the march to fuel electoral victories, according to the Arlington County Democratic Committee.

“This anniversary March, as part of the #WeekendofAction2018, serves as a celebration for what we have accomplished in the past year, a reminder that the resistance is strong and growing stronger, and a call to action for the coming year,” the committee wrote in a statement.

Arlington Democrats attended last year’s march in D.C. — the marches collectively drew more than 4 million people across the country — one day after President Donald Trump’s inauguration. This year, the group is partnering with other progressive organizations like Our Revolution Arlington, Network NOVA and Together We Will NOVA with a “Weekend of Action” to celebrate the march’s one-year anniversary.

On Saturday, individuals interested in participating in the march will meet at the Arlington entrance to the Memorial Bridge at 10 a.m. The group will rally with March Forward Virginia in the District.

A solidarity brunch is scheduled for the day after the march, on Sunday, Jan. 21. Local Democrats will discuss upcoming plans for this year’s elections at Ireland’s Four Courts (20151 Wilson Blvd) from 10:30 a.m. to noon. Nationwide, Democratic groups are gearing up for #PowerToThePolls, a new national campaign launched by the Women’s March to boost voter registration and mobilization in swing states.