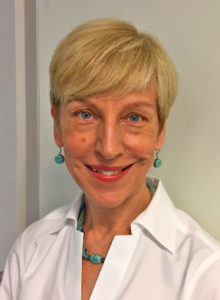 In August, I travelled to Dilley, Texas, to volunteer for a week with immigrants who are seeking asylum. The South Texas Family Residential Center, 80 miles south of San Antonio, houses 2,400 women and children, most from Honduras, Guatemala and El Salvador, who were apprehended by border patrol agents when trying to cross the U.S.-Mexico border.

I’m not a lawyer, and I don’t speak Spanish very well, but when I heard from an attorney friend about this opportunity, I felt compelled to go. With so many stories in the news about family separation, detention and the cruel treatment of immigrants at the border, this was my chance to “do something,” even if I didn’t know exactly what I would be doing. I wanted to be a witness to what is happening to immigrants coming to the U.S. amidst this unwelcoming political climate.

Along with other volunteers with the Dilley Pro Bono Project, my mission was to help women prepare for their Credible Fear Interview (CFI) with asylum officers. Receiving a “positive” after their interview means they are freed from detention (after paying a bond or submitting to wearing an ankle monitor) and can begin the long process of seeking asylum, as is their legal right under U.S. law.

It was not an easy week. We worked 12-hour days, filled with non-stop activity, noise and, often, tears.

For much of the week, I helped women fill out basic forms. As I showed them where to write their name, date of birth and other details, I learned part of their story. The answers to questions on the forms also offered clues about wrenching decisions some of the women had had to make when deciding to leave their country.

Some mothers asked, “Do I only put the name and birthday of the child who is here with me?” Clearly, many had had to leave another child behind. As a mother myself, I couldn’t imagine making that choice.

Other volunteers spent the week helping women prepare for their CFI by asking them to recount the testimony they would tell the asylum officer. Why did they leave their country? What persecution did they face there? What might happen if they went back home?

The extreme danger and violence our clients described was appalling — gangs, rape, death threats, kidnapping, extortion. We learned more about the culture and government of the countries that these women were fleeing, and about the extreme poverty and inequity that contribute to crime and lawlessness. It was clear that these women were escaping from systems that would never protect them. They were victims, not criminals; yet they were in a detention center.

With many CFI interviews looming toward the end of the week, I was asked to do some CFI preps on my own, working with an interpreter by telephone. Thanks to the in-depth training we received and wise counsel from the Dilley Pro Bono Project legal staff, I was able help two clients. It is not often that I feel I’m holding someone’s fate in my hands, but I did that day.

After I returned home, their faces swam before my eyes as I tried to go to sleep at night. Fortunately, I was able to check on their status and it appears that they both have been released from detention, and presumably are now with family or friends as they proceed through the asylum-seeking process.

While I may have helped some women start a new chapter in their lives, I will never know how their stories unfold. As with all mission work, the difference is in me. The women I met are part of my story now.

Back in Arlington, I will never look at the woman from Central America standing next to me in the supermarket line without contemplating her story. I will wonder what happened to make her leave her birthplace, and I will pray it wasn’t as bad as some of the stories I heard in that Texas detention center.

Above all, my week at the detention center reminded me that immigrant detention and family separation are more than just policy issues. They are human issues.

Cheryl Moore has lived in Arlington for 35 years. She has been a volunteer for Arlington Public Schools, her church, civic association, the Arlington Community Chorus, and many nonprofit organizations serving the Northern Virginia community. She continues to work on her Spanish language skills.