Nawal Rajeh was doing some housework and listening to an audiobook in the moments before her life turned upside down.

Rajeh’s home, a small duplex on N. Garfield Street in Lyon Park, caught fire back on Jan. 3, forcing her to jump from her second-story apartment to evade the blaze.

She was left in tattered clothes, sitting on the street in the harsh cold. But Rajeh was soon moved by the kindness of her neighbors, who rushed to her aid to give her clothes and comfort while first responders arrived, even though they’d never met.

Now, about a month later, she’s hoping to thank them for their generosity, in part by sharing her story from that harrowing day.

“It was just shocking the way people jumped in and helped in an emergency like that,” Rajeh told ARLnow. “I’m really glad I lived in that neighborhood.”

Rajeh moved into the apartment just last September, as she pursues a doctorate in conflict resolution at George Mason University’s Virginia Square campus.

She had just returned home from visiting family in Ohio for the holidays the night before the fire broke out, and only just started her day with some house cleaning when she says heard “a loud crashing sound coming from the basement.”

At first, Rajeh didn’t think much of the noise. But she grew increasingly concerned when she heard her downstairs neighbor’s dog, named Bling, begin barking.

The building’s fire alarm then began sounding, prompting Rajeh to throw open the front door of her apartment.

“The entire stairwell was this thick, black tornado of smoke barreling in, I couldn’t see anything,” Rajeh said. “So I shut the door, I knew there was no way I could go down those stairs.” 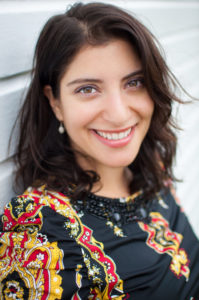 Accordingly, she ran back to her bedroom, kicked out the screen to her window and decided to hang on the ledge until someone could help her down. Rajeh began screaming for help, but no one noticed her — the window was located on the side of the building, away from the street.

“I knew I could hang there for a while, I go to climbing gyms a lot,” Rajeh said. “But I couldn’t keep inhaling the smoke much longer.”

So she made the difficult decision to let go, plummeting into a bush below her window.

Luckily, Rajeh didn’t break any bones during the fall, though she did suffer some injuries from landing on the bush. She says firefighters later told her she managed a “very athletic jump,” given the circumstances.

Rajeh hobbled her way to the street, where a crowd of onlookers had gathered. Some were daycare workers who had been walking past the duplex and noticed the fire; others simply lived nearby and had called 911.

“I was wearing leggings when I jumped, and those were completely ruined,” Rajeh said. “I didn’t have any shoes on or anything… but people went up into their houses, brought me socks and shoes and a jacket.”

She says first responders arrived soon afterward, and she urged them to get inside the building and rescue Bling, the only other occupant of the duplex when the fire broke out. He inhaled a bit of smoke, but Rajeh says he’s since recovered well and is “back home, with an appetite again.”

Rajeh still isn’t sure what caused the fire — county fire department spokesman Ben O’Bryant says fire marshals determined “that the fire started in a mechanical room in the basement, but weren’t able to tell if it started in the HVAC unit or hot water heater.”

She’s since moved into another vacant property owned by her landlord elsewhere in Arlington, but lost most of her belongings in the fire. She says just about everything in the apartment was either burned to a crisp or “reeked of smoke” and was beyond saving.

But she says the local chapter of the American Red Cross has helped out with some essentials, and her wounds have mostly healed.

Some of her neighbors are now planning to bring Bling by the local fire station so he can properly thank his rescuers, and Rajeh hopes to deliver her own expressions of gratitude to her neighbors who helped her when she was in need.

She doesn’t know all of their names, but she hopes to swing by her old neighborhood to offer her thanks all the same.

“It’s just the kind of thing you don’t expect from city living, but there were a lot of caring people I’d never met before,” Rajeh said.

Photos 1, 2 and 3 via @ArlingtonVAFD, headshot courtesy of Nawal Rajeh

END_OF_DOCUMENT_TOKEN_TO_BE_REPLACED

More Stories
The Right Note: What a WeekBREAKING: Lynn Street Closed After Explosion Heard in Rosslyn