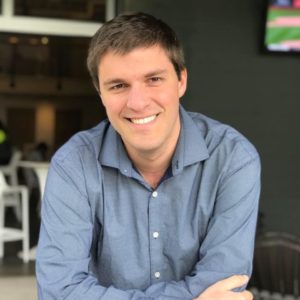 Progressive Voice is a weekly column. The views and opinions expressed in the column are those of the individual and do not necessarily reflect the views of their organizations or of ARLnow.

While young progressives across Virginia are mobilizing to retake both chambers of the legislature in this year’s elections, it is impossible for us to ignore the 2020 Democratic presidential primary already in full swing. Were you to ask 100 millennials whom they support right now, you would find answers as diverse as the generation itself. Some are looking to experience and electability, others are drawn to candidates taking aggressive stands on issues like healthcare and taxes.

The tension is understandable. On one hand, the daily chaos fosters an understandable desire for the stability of traditional politics. This path, it could be argued, offers the best chance of capturing voters disillusioned with the president and his party. This type of candidate may not grab the headlines, but by remaining moored to positions that helped Democrats retake the House in 2018, it is not unreasonable to believe it would work again in 2020.

On the other hand is the view that we must find a candidate who is bold and daring. Now is not the time for the “safe” politics of yesterday, but instead beckons us to pursue sweeping policy changes since the current framework isn’t adequately addressing the needs of so many people, including millennials. This perspective counsels us to pick a candidate whose vision goes beyond the 2020 election and who can help lead the nation into a new progressive era.

Though millennials’ support remains split among the various candidates, there are several broad areas where there appears to be general agreement. The first is that number of candidates must be narrowed–and quickly. Trying to accommodate 10 candidates on a debate stage, some of whom are barely registering any support, reduces the chances for a forum for thoughtful discussions. Ultimately, crucial time is lost and the quality of the debate suffers.

Talk to millennials and you will hear a related frustration that someone like Steve Bullock is running for president instead of eyeing the Senate seat in Montana. We know that the Republican-controlled Senate must be flipped for a Democratic president to pass any meaningful legislation and fill key vacancies, such as on the Supreme Court. Quixotic campaigns by candidates who have no path to the nomination waste time and energy. As these doomed campaigns stumble forward, money and manpower are being sucked away from important efforts to retake the Senate and hold the House majority.

Honest leadership means setting aside personal ambition. Any Democratic candidate for president who continues to poll below 2% by the middle of August should accept that reality and move on.

Young people are also aware of how important unity will be in 2020 for defeating the president and having any chance of controlling Congress. This means that presidential candidates should avoid poisoning the race with personal attacks and uncompromising stances. This does not mean contenders should abstain from engaging with each other with conviction on issues that may be uncomfortable, but it does mean that the debate should be framed with an eye toward the general election. To win, the Democratic Party must be a big tent that welcomes difficult discussions, but also respects the diverse viewpoints from moderate to liberal.

The final shared view among my cohort is simple: that we must win. The danger of this moment is real, and we can never forget that. Left, right or center–now is not the time for protest votes or ideological rigidity. The stakes are far too high. The candidate who wins the nomination will not align perfectly with my beliefs and may not even be one of my top choices.

But I do know already that the nominee will be someone who at least believes in democracy, the rule of law, and basic decency. And in the end, that will be more than enough motivation for me.

Nick Dilenschneider is an attorney who commutes to D.C for work, and who enjoys Arlington’s many neighborhoods, establishments and opportunities for civic involvement.