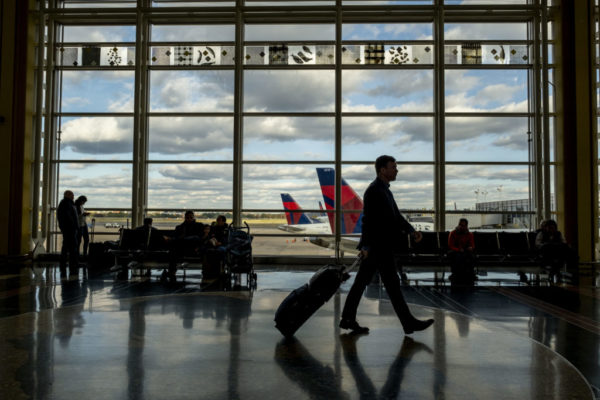 (Updated at 4:35 p.m.) Expect heavy traffic at the airports and on local highways as more than a million people depart the D.C. area for the Thanksgiving holiday.

According to Reagan National Airport, peak travel days include today (Tuesday) and tomorrow (Wednesday), plus Saturday and Sunday for those returning from their Thanksgiving vacation.

Travelers are advised to take Metro and use terminal garages due to ongoing construction for a new 14-gate concourse at DCA, titled “Project Journey,” that has reduced lane capacity on the Arrivals roadway in front of Terminal B/C. Meanwhile, big storms affecting large portions of the country may bring flight delays and cancellations.

On the roads, AAA Mid-Atlantic is predicting a “big exodus,” with the worst traffic expected tomorrow.

“As a result, holiday travelers exiting the area and those staying put for the holiday, will encounter heavier traffic congestion, as well as travel delays that are almost three times longer than the normal delays — if there is such a thing around here — during the afternoon rush hours on any given Wednesday.”

Another traffic tracking company agrees, saying 3-5 p.m. on Wednesday should bring the worst traffic on D.C. area highways and arterials.

As Thanksgiving is one of the worst times of the year for crashes, Virginia State Police will be participating in Operation C.A.R.E. — Crash Awareness and Reduction Effort — starting tomorrow and running until December 1. The program, will increase police visibility and traffic enforcement efforts throughout the five-day holiday period.

The Arlington County Police Department, meanwhile, has partnered with the U.S. Department of Transportation’s National Highway Traffic Safety Administration for a high-visibility “Click It or Ticket” campaign, starting today and running until December 6.

The Metropolitan Washington Airports Authority had the following tips for travelers, after the jump.

As Thanksgiving approaches, the Airports Authority expects to see heavier traffic and passenger volumes traveling through its two National Capital Region airports from Nov. 21 through Dec. – especially on peak travel days leading up to and immediately following the Nov. 28 holiday.

As a result of the forecast increase in traveler volume, significantly higher congestion is expected on airport roadways and inside the terminals — especially at Reagan National, where Project Journey construction has reduced roadway lanes and sidewalks at Terminal B/C by about one third.

To ensure a faster, more enjoyable and less stressful experience when coming to Reagan National or Dulles International this holiday season, keep these tips in mind:

The Airports Authority wishes all those traveling through Reagan National and Dulles International a safe journey and happy holidays. For more travel tips and information, construction updates and a complete schedule of holiday events and performances, visit FlyReagan.com and FlyDulles.com.