We lost a tree in my neighborhood during the storms last month. It was a large tree that provided shade for the nearby tennis and basketball courts. It will take decades for a new tree to provide that benefit for the park. But as a forward-thinking community, we plant trees now knowing that they will provide shade in the future.

This is an apt metaphor for housing affordability. We need to build new housing now so that we have older homes that will be affordable for middle-income families in the future. Therefore, when we evaluate our zoning policy or a site plan, we shouldn’t only judge it by the cost of the new housing that will be produced, but also on the cost of the older housing that it will become.

It is easy to complain about a new apartment building because it will charge extremely high rent when it opens. But this is the beginning of the building’s lifecycle that will eventually end up as a more affordable property.

Searching through advertisements in the Washington Post from the 1960s-1980s, I found many examples of buildings once described as “luxurious” that now have rents affordable to those making 60-80% of the Area Median Income (approximately $50,000-$90,000, depending on household size). 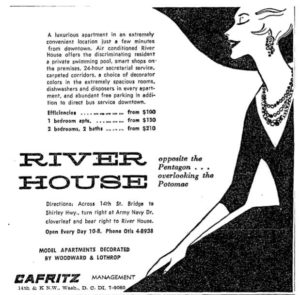 For example, RiverHouse in Pentagon City was described as “luxurious” when it first opened. It was Northern Virginia’s first high-rise apartment building and it had air conditioning, which was rare for homes in 1957. Now, River House one of the most affordable buildings in the area and is home to many long-term residents. Older buildings are cheaper because they have fewer amenities and lack the on-trend upgrades of the newest buildings.

The process can work in the opposite direction as well. Older properties can get renovated and command high prices. Every year, Arlington loses market-rate apartment buildings that are affordable to moderate- and low-income households. Every redevelopment is a noticeable loss because we don’t have a pipeline of aging buildings that can provide affordable options.

Preserving these older, more affordable homes is one strategy for maximizing housing options in Arlington. We can also accept that older buildings will eventually be renovated and made more expensive and rely on a new crop of aging buildings to take their place in our housing ecosystem. When we allow enough housing to meet demand, there will always be a segment of older, less flashy buildings are affordable to lower- and middle-income households.

Blocking new construction because it results in “luxury apartments” is the same as objecting to a newly planted tree because it doesn’t yet provide shade. Let’s plan for future growth that we know is coming so that we can have homes for people at all income levels and at all stages of their lives.

Jane Fiegen Green, an Arlington resident since 2015, proudly rents an apartment in Pentagon City with her family. By day, she is the Membership Director for Food and Water Watch and by night she tries to navigate the Arlington Way. Opinions here are her own.