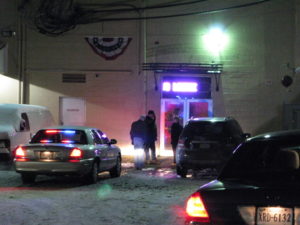 An officer was assaulted during the scuffle and suffered minor injuries, but did not require hospitalization, Maj. Gavin said. There were no arrests.

The brawl happened in a snow-covered parking lot outside the V3 Lounge nightclub, located at 6763 Wilson Blvd. in Falls Church, behind the Eden Center shopping plaza. There have been several prior incidents at the recently-opened club, according to police.

Shortly after the melee a small crowd gathered at a nearby gas station. They were tight-lipped about what happened.

“I don’t know, I didn’t see anything,” said a man with fresh bruises around his eye and lip.