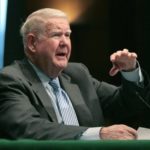 Rep. John Murtha (D-PA) is in the intensive care unit at Arlington’s Virginia Hospital Center. Murtha’s spokesperson said the 77-year-old congressman was brought to the hospital after suffering complications from gallbladder surgery. Murtha, as chairman of the House Appropriations defense subcommittee, wields considerable power and influence at the Pentagon and with Arlington’s defense industry.

After the jump, a statement by Secretary of Defense Robert Gates.

I was deeply saddened to hear of the passing of Jack Murtha. America has lost a true patriot who served his country faithfully first in uniform as a decorated combat Marine, and then as an elected representative.

I’ve known Jack and worked with him for more than two decades, starting back in the Reagan administration when I was at CIA. I will always remember and be grateful for Congressman Murtha’s personal efforts on behalf of the Afghan resistance fighting the Soviets – efforts that helped bring about the end of the Cold War.

In our dealings over the years, Jack and I did not always agree, but I always respected his candor, and knew that he cared deeply about the men and women of America’s military and intelligence community. My condolences to Joyce and the rest of the Murtha family.