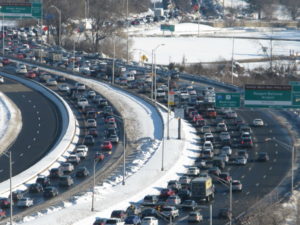 Update at 12:30 PM -Congestion on I-395 is finally beginning to thin out near the 14th Street Bridge. Metro, whose web site has crashed, says that an earlier train derailment on the Red Line at Farragut North station (more on that in the next post) has been cleared. Obviously, Metro delays continue.

Update at 12:10 PM – It’s noon and the traffic still looks like it did at 9:30, when the picture to the left was taken. At this point don’t you just turn around and head home?

Update at 10:10 AM – Metro trains on the Orange Line are running about once every 45 minutes, resulting in a huge crowd of waiting passengers at Ballston station, according to a reader via Twitter.

As most federal employees head to work for the first time this week, the primary worry for DC-area drivers has gone from snow-covered roads to traffic-clogged highways. Call it a return to normalcy.

Currently, there’s heavy traffic throughout the entire length of I-395 North. VDOT cameras show a continuous stretch of slow traffic on I-66 East from DC to well beyond the Beltway. And the GW Parkway is also backed-up.

WTOP is blaming the back-ups on the limited Metrorail service. In an interview,  Virginia Democrat Rep. Gerry Connolly told the station that Metro needs more funding so it can recover more quickly from events like this week’s blizzard.

Connolly said the federal government should share part of the burden for Metro’s budget.