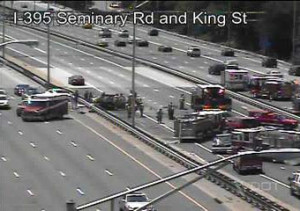 A car flipped over in the HOV lane of I-395 around 1:30 this afternoon, trapping the driver and snarling traffic. No word on whether the driver is injured.

As of 1:45, the HOV lanes and two lanes northbound and southbound I-395 are blocked between Seminary Road and King Street.

First responders from Arlington and Alexandria are on scene, along with Virginia State Police.

As of 2:15, major delays on southbound I-395 were forming just past the Pentagon. The driver appears to have been freed from the vehicle.

Read more →
More Stories
On This Day, We Were Given Representation in CongressEast Falls Church Plan, New Rosslyn Metro Station on Saturday’s Board Agenda