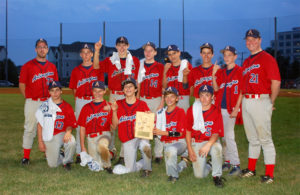 The Arlington team bounced back from a 1-11 loss against Vienna, beating the same Vienna team 10-4 to capture the district title.

“We were able to re-focus and win the game with strong pitching, great defense, and some timely hits and bunts,” coach Greg Wigton said. “We scored 8 runs in the 4th inning, and added 2 more in the 7th.”

The team roster, after the jump.