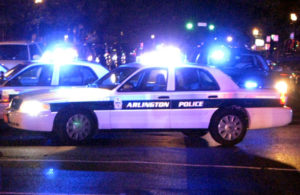 Feeling down because you just got lit up by one of Arlington County’s finest for making an illegal right turn on red? Don’t worry, you’re in good company.

Even the rich, influential and famous get traffic tickets in Arlington County. And it seems there’s no limit to how small the infraction or how well-known the offender.

The good doctor Hunter Doherty “Patch” Adams — yes, the guy who  Robin Williams portrayed in a movie — was stopped for going 44 miles per hour in a 30 mile per hour zone last December. Dr. Adams, a north Arlington resident who travels the world dressed as a clown to bring joy to sick children, paid the fine a week later.

Washington Capitals players practice and often live in Arlington. Thus it’s not surprise that a few players have had their sweet rides stopped by Johnny Law.

Earlier this year Caps forward Nicklas Backstrom was stopped for “failure to obtain a county decal within 30 days.” Charges were eventually dropped.

Somewhat surprisingly, Arlington resident and sports car owner Alexander Ovechkin appears to have a squeaky clean record in the county.

Politically-influential, famous-for-DC types are unable to get away with minor infractions, however.

In particular, Washington Post columnists seem to be a bit forgetful when it comes to their cars. Eugene Robinson was stopped last January for an inspection sticker that expired one month prior. He paid the $81 fine two months later.

David Broder has been convicted of five traffic violations in the past two years. Charges against Broder have included speeding, an HOV violation and driving without a license.