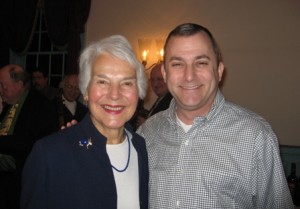 We’re less than 30 days away from this year’s mid-term elections — thus why you see the legions of campaign signs popping up along Arlington’s roadways. Unless Patrick Murray or Mark Kelly can pull a big upset, however, the next truly interesting race may be the 2011 primaries.

State Sen. Patsy Ticer, a Democrat who represents a large chunk of south Arlington, as well as parts of Alexandria and Fairfax County,  has so far shown no signs of interest in seeking another term.

Among the names of potential replacements being floated around, one is reportedly not interested, but another almost certainly is. Sources close to Del. Adam Ebbin tell us that he’s interested in seeking the Democratic nomination for Ticer’s seat. Ebbin, who also represents parts of Arlington, Alexandria and Fairfax, has held his current House of Delegates seat since January 2004.

In the coming months we’ll see who else steps up to the plate.