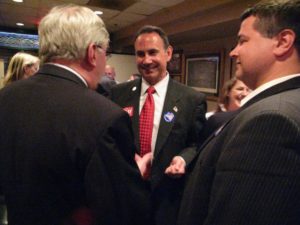 (Updated at 4:40 p.m.) Republican congressional candidate Patrick Murray raised $173,164 from July 1 to Sept. 30. After expenses, that leaves Murray with $107,937 cash on hand heading into the home stretch of the campaign.

The figures were revealed in a financial disclosure filed with the Federal Election Commission this morning. Today is the deadline for quarterly financial filings from congressional candidates.

Murray has held fundraisers with a number of boldfaced GOP names recently. He has also been designated as “On the Radar” by the National Republican Congressional Committee.