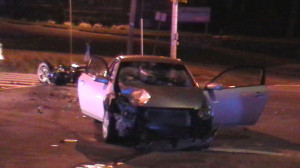 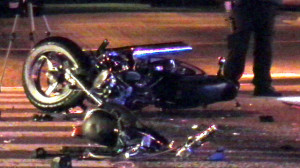 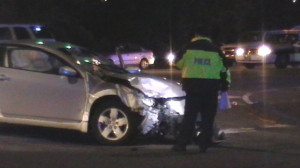 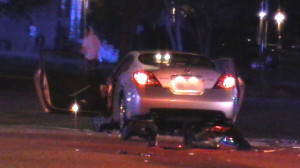 A motorcyclist died after a violent collision with a car on Route 50 Friday night.

The accident occurred just after 9:00 p.m. at the intersection of Route 50 and Irving Street. The car, a Nissan, collided with the motorcycle in the intersection, police said. The motorcyclist was taken to a local hospital, where he was pronounced dead. The driver of the car remained on scene.

Police say the accident is under investigation. So far, no charges have been filed. The name of the motorcyclist is being withheld while police notify his next of kin.

The accident scene told the story of a horrific collision. Parts of the motorcycle were spread across the eastbound lanes of Route 50. The car’s front end was badly damaged, the airbags were deployed, and the front windshield was shattered. A single black leather cowboy-style boot lay upright near the side of the road.

The wreck shut down the eastbound lanes of Route 50 for several hours as investigators took photos and tried to figure out how the accident happened.

One man who lived nearby said he heard the accident from his house and walked to the scene to see what had happened. He said there have been at least three other accidents at the intersection in recent memory.

Update on 10/17: The driver is expected to be charged with DWI and manslaughter, sources tell ARLnow.com. The accident happened when the victim was heading eastbound and the suspect was turning from the westbound lanes, we’re told.

Police say they expect to release more information about the crash on Monday.

Update on 10/18: The suspect has been charged with manslaughter, and the victim has been identified. The possible DWI charge, mentioned above, has not materialized yet. But police tell us they’re still investigating whether alcohol could have played a factor in the accident.

From a police news release:

ARLINGTON, Va. – The Arlington County Police Department is investigating a fatal accident that occurred on Friday, October 15, 2010, at Arlington Boulevard (Route 50) and Irving Street.  At approximately 9:09 P.M., a vehicle collided with a motorcycle in the intersection.

The driver of the motorcycle was transported to an area hospital, where he was pronounced dead. He has been identified as Gerald Glasper, 42, of Arlington.

The striking vehicle remained on scene. Jonathan Mendez, 25, of Washington D.C. charged with Manslaughter later that evening. He was held at the Arlington County Detention Center without bond.

The accident is still under investigation. Arlington County Police ask that anyone who witnessed the accident or has information relating to this incident call Detective Tamara Celestini at (703) 228-4164.