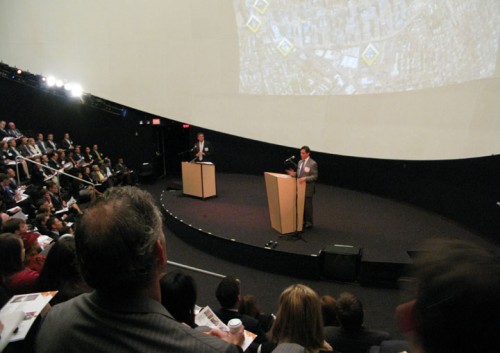 Earmark Could Save Planetarium — Rep. Jim Moran says he’s going to try to dig up $400,000 in federal funds to help renovate and save Arlington’s David M. Brown Planetarium. But even if he’s successful, Moran’s press secretary says the money would not be available until late next year — past the fundraising deadline the school board set for the non-profit Friends of the Planetarium group. More from the Sun Gazette.

Golf Farce Premieres at Signature Theater — Now playing at Shirlington’s Signature Theater: A Fox on the Fairway. The show, which is making its world premiere at Signature, is a “screwball comedy” and “a tribute… to the great English farces of the 1930s and 1940s.” Starring Jeff McCarthy, Holly Twyford and Andrew Long, A Fox on the Fairway is “about love, life, and man’s eternal love affair with… golf.” See a video promo here.

Sushi Rock Applying for Dance Hall Permit — Sushi Rock wants to become a late night party spot. But it also wants to “keep the volume to a reasonable level,” which means lots of sound-proofing material. The county board is expected to decide whether to grant Sushi Rock a live entertainment and dance hall permit at its upcoming round of meetings — either Saturday or Tuesday. More from TBD.