(Updated at 9:50 a.m.) Republican congressional candidate Patrick Murray is seizing on remarks about his experience made by his opponent, Rep. Jim Moran, at an Arlington County Democratic Committee meeting. And, it seems, Murray is picking up some long-sought traction, at least from right-leaning media outlets.

With cameras rolling, Moran said of Murray, a retired Army officer: “What [Republicans] do is find candidates, usually stealth candidates, that haven’t been in office, haven’t served or performed in any kind of public service. My opponent is typical, frankly.”

The gaffe-prone congressman then dug the hole a bit deeper while referring to Murray’s limited government stance.

“Of course for 24 years he’s taken a government check, because, frankly, the military is still part of the federal government, and yet his principal platform is to cut government spending,” Moran said. 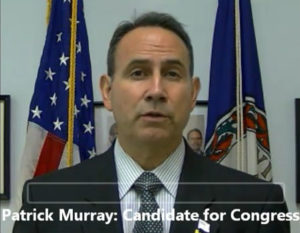 The Murray camp, in response to Moran’s “public service” swipe, has issued a flurry of YouTube videos, press releases and blog posts. Today at 12:30 p.m., nearly three weeks after the original remarks were made, Murray will be holding a news conference in Alexandria with veterans who support his campaign. (Update at 5:00 p.m. — The campaign has posted video from the event here.)

The press conference comes as right-leaning outlets like the Washington Examiner, The Weekly Standard, Fox News and others have started to pick up the story. It’s the first round of sustained media exposure in a race that has otherwise seen a dearth of reportorial interest from mainstream news outlets.

In what may be a preview of today’s press conference, Murray released a video response to the comments.

“Congressman Moran, I’m proud to have served my county in the Army for 24 years, including tours in Bosnia, Kosovo and Iraq during the surge,” Murray said. “Why don’t you come with me to Arlington cemetery, where more of my friends and fellow service members are buried than I care to think about — and tell their surviving family members that their loved ones had no public service.”

For his part, Moran says that he misspoke.

While Moran “commends” Murray’s military service, his campaign says he’s “disappointed by [the] distortion of his remarks.”

“[Congressman Moran] has the deepest respect for our military and those who sacrifice to protect our security and freedoms,” Moran’s campaign said in a statement. “As Congressman, he has worked hard over the course of his career to strengthen our Armed Forces, particularly as a senior member of the Defense Appropriations Subcommittee, which funds all of the military’s operations.”

“The point Congressman Moran was making is that Northern Virginia is a region that prides itself on local civic engagement – serving in the PTA, on local boards, working with non-profits to help those less fortunate and also serving in local elected office,” the campaign continued. “Because Murray has virtually no ties to our community – moving here a scant 18 months ago in order to run for Congress – it is difficult to see how he can adequately represent Northern Virginia.”

The Murray campaign, in what could be described as a bit of a reach, has also released a video claiming that Moran is “proud of faking military endorsements.”

In the ambush-style video, someone asks the congressman as he’s leaving a recent event in Rosslyn: “Are you proud of your endorsement from the Disabled American Veterans Association?”

Moran, a bit befuddled, responds: “Uh… sure. Uh, I mean I would always be proud to have support from the Disabled American Veterans.”

“Jim Moran doesn’t have the endorsement from the Disabled American Veterans,” a title card says after the clip. “They don’t make endorsements. Isn’t claiming non-existent support from wounded veterans a little sleazy?”