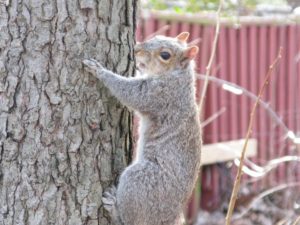 If you’ve noticed more acorns on the ground than usual this fall, you’re not crazy. In fact, 2010 is “a bumper year” for acorns, according to a naturalist quoted by the Sun Gazette.

After an arduous nut famine in 2008, Arlington’s four species of squirrels are enjoying the feast, writes Scott McCaffrey. And the excess acorn production isn’t just good news for squirrels — it’s also good news for trees. The plethora of nuts may eventually result in new trees sprouting up around the county.

The DC area isn’t the only part of the country seeing an abundance of squirrel food. Ohio is “looking at its best [acorn] crop since 2005,” according to the Columbus Dispatch.

Why are the acorns so bountiful?

The meteorologists over at ABC 7 say that a lack of a major spring frost and a summer drought helped to spur acorn growth.