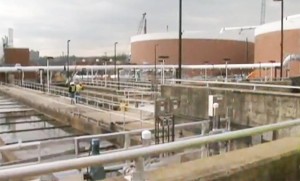 A top manager in charge of the project to upgrade Arlington’s Water Pollution Control Plant embezzled nearly $5 million from the project’s contractor, according to a lawsuit filed in St. Louis two weeks ago.

Alberici Contractors Inc. says it did not over-charge Arlington County for its work on the $568 million project as a result of the embezzlement. Instead, the company says that the embezzlement cut into its own profits on the project.

The St. Louis Business Journal reported today that Jeff Oliver, the company’s project director for the sewage plant upgrade and expansion, is being sued for $4.8 million. Alberici says Oliver conspired with two subcontractors to over-bill the company.

“We have a special fiduciary responsibility for public funds,” Arlington County Manager Barbara Donnellan said in the statement. “We will do everything we can to make sure that the project and Arlington taxpayers were not hurt by these perpetrators.”

The project is nearly complete and Oliver “is no longer associated with the project,” the county said.