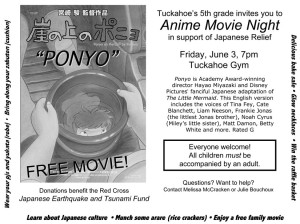 The students, fifth-grader Keishu Watanabe and his sister, second-grader Saho (both seen in the video, below), moved from Arlington to Tokyo with their parents just weeks before the earthquake and tsunami that devastated Northern Japan earlier this year. With a personal connection to the disaster, “graduating” fifth-grade students and parents at Tuckahoe decided to raise money to help the victims.

Tomorrow, starting at 7:00 p.m., the school will host an “Anime Movie Night” featuring a screening of Ponyo, the Japanese adaptation of Disney’s The Little Mermaid. The family-friend film has been dubbed into English, thanks to the voices of Tina Fey, Cate Blanchett, Liam Neeson, Matt Damon and Betty White.

The screening is free and open to the public, but children must be accompanied by an adult. Donations, raffle proceeds and bake sale revenue will go to the ‘Japanese Earthquake and Tsunami Fund.’ Kids are encouraged to wear pajamas and a yukata (robe), grab some glow necklaces and munch on arare (Japanese rice crackers).

Even though they’re halfway around the world, students at Keishu and Saho’s new school are so excited about the fundraiser that they banded together to make Tuckahoe a Senbazuru, a large hanging of 1,000 hand-made paper cranes. The gift — a symbol of peace and friendship — was sent to the school, where officials are now deciding on a prominent place to display it, according to Arlington Public Schools spokesman Frank Bellavia.