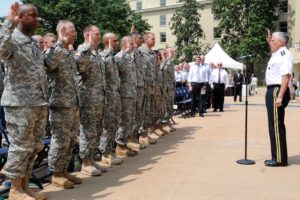 You’ll be seeing fewer battle fatigues on the Metro later this year.

The Army — which will be celebrating its 236th birthday tomorrow — has just announced an impending policy change for personnel who work at the Pentagon. Starting as early as October, soldiers assigned to the Pentagon will be asked to wear the more formal Army service uniform instead of the camouflaged Army combat uniform (ACU).

“Our perspective is that this is the corporate part of the Army,” Sergeant Major of the Army Raymond F. Chandler III told the Army News Service. “The business-part of the Army is done in the Pentagon, and as a professional there are certain standards of attire associated with certain activities. For the business aspect of the Army, it is the Army service uniform.”

The exact implementation date has yet to be announced.