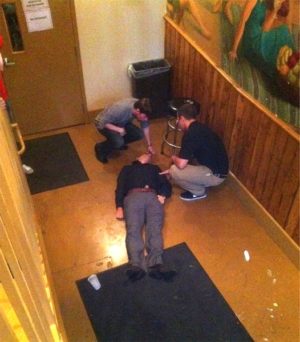 Police are investigating an incident that happened at a popular Clarendon watering hole Friday night.

A man was knocked to the ground in a stairwell at Whitlow’s on Wilson (2854 Wilson Blvd) just before 9:00 p.m. A bar patron who saw the aftermath told ARLnow.com that the man was bleeding from his ear and from a fracture in the back of his head.

“This guy was in really bad shape,” said the tipster. “I am a former Marine and I’ve seen some nasty stuff, and this was pretty bad.”

The police report suggests that the man started arguing with a bouncer when he was told he couldn’t bring his drink outside. The bouncer then hit the man, knocking him over, according to the police report and a witness, who Tweeted a photo of the man lying on the ground. The man apparently suffered a head injury upon hitting the floor.

The injured man has not made a statement yet, police say, and at this point no charges have been filed. Police say the man is in the hospital with what appear to be non-life threatening injuries.