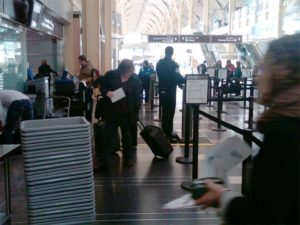 Two women were involved in an unusual altercation in Terminal A of Reagan National Airport this morning.

The alleged scuffle started around 8:40 a.m. when one of the women inadvertently struck the other with a suitcase, according to airport spokeswoman Courtney Mickalonis. The woman who was holding the suitcase later told airport police that the woman she struck then stood up and hit her several times.

While airport police were escorting the suitcase holder to the Arlington County Magistrate’s Office to swear a warrant against the other woman, the alleged attacker claimed that she was injured, Mickalonis said. Arlington County paramedics were called to treat her.

No word yet on whether any charges will be filed in connection to the altercation.