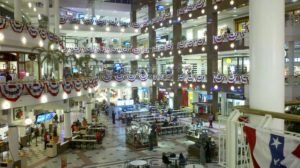 The Fashion Centre at Pentagon City mall will be the site of a large-scale emergency training exercise next weekend.

From 4:00 a.m. to 12:00 p.m. on Sunday, Aug. 28, first responders from Arlington’s police, fire and sheriff’s departments, as well as the Arlington County Office of Emergency Management and the Alexandria Police Department, will conduct a joint training exercise inside the mall.

“The purpose of the exercise is to test the response of Arlington County’s public safety agencies in a simulated emergency situation,” Arlington Police said in a statement. No word on the exact type of emergency that will be simulated.

“Residents are advised that there could be some temporary traffic delays as emergency equipment is moved into place,” the statement said. “There will be a large number of public safety vehicles in the area of The Fashion Centre at Pentagon City, The Arlington County Trades buildings, and several parking lots along Army Navy Drive across from the mall. The vehicles will not use their lights or sirens during the exercise. The mall will open for normal shopping hours.”

“Since the 9/11 terrorist attacks, Arlington County has devoted its resources to emergency preparedness,” the statement continued. “This exercise is one example of the many ways the agencies of the National Capital Region train to ‘expect the unexpected.'”