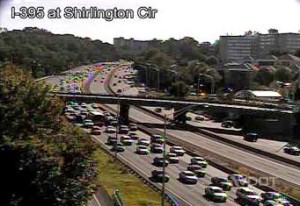 Earlier: Traffic is moving at a crawl on northbound I-395, from Alexandria to the 14th Street Bridge.

Commuters heading from Virginia to the District following today’s earthquake have jammed the highway, causing major delays. The southbound GW Parkway is also reported to be slow heading toward interchange with I-395.