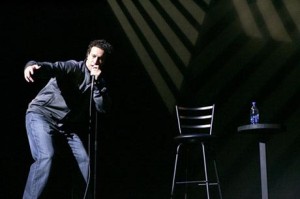 Pauly Shore will be performing stand-up comedy at the Arlington Cinema Drafthouse (2903 Columbia Pike) next month.

The former MTV host also has writer, producer and director on his resume, but he’s best known for his starring roles in mediocre 1990s comedies like Encino Man, Son in Law, In the Army Now, Jury Duty and Bio-Dome. More recently, Shore has had guest roles on TV series like Entourage and the short-lived “reality” show Sunset Tan.

Shore is scheduled for four performances (an early show and a late show) on Friday, Sept. 16 and Saturday, Sept. 17. Tickets are currently on sale for $25.

“Shore’s stand-up is sprinkled with autobiographical tidbits from his wacky life,” according to the Cinema Drafthouse’s web site. “His goal is to make sure the fans leave the show learning something about him.”