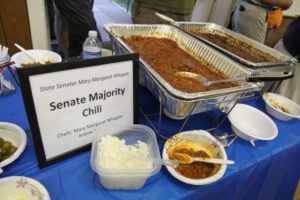 The plan was for elected officials and other Democratic notables to get dunked while raising money for the Arlington County Democratic Committee. Alas, Mother Nature had other plans. With storms in the forecast, organizers reluctantly canceled the first annual Democratic dunking. Instead, as heavy rains descended on the area, attendees had to make due with the usual formula of chili, music and conversation as they huddled inside the hot and humid Lyon Park Community Center.